Accelerated Learning with Smartphones in Physics

Profweb published an in-depth report which included some considerations when teachers are deciding whether to allow or restrict the use of smartphones in class. At John Abbott College, some physics teachers have found a unexpected way to leverage their student’s penchant for smartphone use by incorporating these devices as tools to teach core concepts in Physics.

Chris Isaac Larnder was awarded an Entente Canada-Québec grant for 2 successive years to support a project to create lab activities related to physics concepts and digital technology. He and his colleagues worked primarily with sensor devices in smartphones known as accelerometers.

In a nutshell, accelerometers are the devices in smartphones that help them to sense movement. When you flip your phone horizontally or vertically to see a picture in full frame, for example, it is the accelerometer that detects this movement and sends signals to the phone’s processor which eventually results in the screen flipping from portrait to landscape or vice versa. There are a variety of potential applications for using the accelerometer, like pedometers or motion detection apps.

Accelerometer technology has, in recent years, become less expensive and more accessible, and you can purchase an inexpensive tablet or smartphone for $100 or less that includes an accelerometer. Chris Isaac has been fascinated by sensors for many years and has a strong background in programming. After some thought and experimentation with a mobile device, it occurred to him that a physics lab that used the accelerometer as a tool to teach core concepts might be possible.

Teaching abstract physics concepts to students can be a challenge when they have little context for their learning. By working directly with accelerometers, “students are likely to discover that mastery of fundamental physics has become, today, not less but more relevant to their techno-literacy.” Such was the premise of a presentation led by Chris Isaac and his colleague Michael Pagano at the 2017 SALTISE conference, and of a follow-up hands-on workshop with colleague Brian Larade at the 2018 edition of the same conference.

Laboratory exercises were developed for each of these techniques. Each of the labs includes classic physics concepts and approaches, but also integrates new exercises that take advantage of mobile device technology.

In the tilt lab, students discover the XYZ coordinate system and carefully measure the “critical angle” at which a smartphone rotates from portrait to landscape views. Chris Isaac tells me that each device has its own critical angle based on the programming choices of the app developers.

Chris Isaac prepares students for the lab with a discussion of how accelerometers work and how, in static settings, they can be used to sense the gravitational acceleration vector.

Students come to the lab with an accelerometer app that they have already installed themselves beforehand (Chris Isaac has installation and configuration instructions for both for iOs devices or the for Android devices). “This is where the fun begins. While watching the real-time display of all 3 acceleration components, the students hold their phone on its left side, its right side, upright, upside-down, flat on the floor and directly above their heads.” For each orientation, they note which axis ( X, Y or Z ) is responding to gravity and whether it is positive or negative. “They begin to piece things together, sensing that there is a logic, some kind of internal consistency to the way in which the display is representing the multitude of phone orientations.” This consistency is the logic of a 3D coordinate system. At some point in this preliminary exercise, Chris Isaac reports, the experience sinks in and “a minor epiphany can take place. They realize that they are holding a local coordinate system in their hands and that they know how to read it.”

Throughout their investigation, the students develop an appreciation for physics concepts like vectors, the geometry of the inclined plane, normal forces, gravitational acceleration vectors and force-acceleration relationships. Their new-found confidence with three-dimensional coordinate systems and spatial reasoning, in particular, comes in handy for the analysis of many  phenomena related to circular motion and becomes indispensable for the tackling magnetic phenomena later in their studies.

A second lab explores the principles of centripetal acceleration in a dramatic and high-tech style that would capture the attention of even the most blasé of students. They are invited to place their beloved smartphones on a turntable and spin it at a the high rate of 78 RPM. Although an adapted turntable surface with a protective border ensures there are no mishaps, “the mere potentiality of danger has a galvanizing effect on their cognitive abilities: Suddenly they are connecting theoretical notions with something they recognize as an immediate and urgent real-world safety issue.”

The procedure reads like a high-tech detective story: Somewhere within the body of the smartphone lies the tiny accelerometer sensor. But where, exactly? “Rarely is it placed anywhere near the center. It is somewhere on the internal circuit board. Rarely does it end up being at the geometrical center of the device. And it changes from one model to the next.” 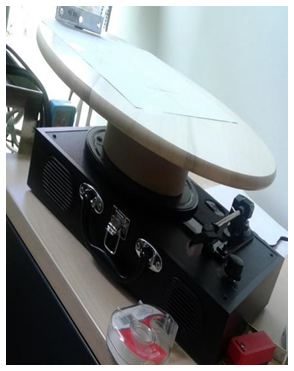 When the smartphone spins, the accelerometer app is once again recording the acceleration, this time providing information about the components of the centripetal acceleration vector. Knowing that this vector must point exactly to the middle of the circle, they can deduce the approximate location of the sensor by drawing a radial line. By placing the phone at different locations and repeating this exercise, the exact location can be pinpointed with increasing accuracy.

As an optional perk, Chris Isaac suggests they look up on the web to find the circuit diagram for their model of phone. “It is extremely validating for the students to see their physics skills allowing them to predict what is inside the circuitry of their phone.”

Chris Isaac’s current tilt lab procedure is the result of multiple re-edited revisions based on the cumulated feedback from 4 different teachers at John Abbott and 1 teacher at Marianopolis, totaling well over 200 students.

He reports that students are enthusiastic about the approach. They pay attention and are pleasantly surprised to learn that they will be learning physics using smartphones. Anecdotally, he finds that student engagement has increased, and Chris Isaac hopes to develop a questionnaire to receive more student feedback in the future.

The tilt and spin labs were the subject of workshops that he specifically designed to allow teachers to try out and easily adopt these labs. These took place at the SALTISE 2018 conference this past May, as well in August of 2018 at the colloque collégial of the AESTQ (Association pour l’enseignement de la science et de la technologie au Québec).

Chris Isaac has developed the material for the tilt lab and the spinning lab in both French and English and would be pleased to share it with you and receive your feedback.

Use What Students Know and Love

Chris Isaac and his collaborators (teachers Michael Pagano, Brian Larade, Etienne Portelance and Maggie Livingstone as well as student Frédéric Prévost) should be applauded for their efforts to take a tool that students love and use it as a means of engaging the students in their learning. On another level, it is also important to encourage student curiosity and get them thinking about what is “under the hood” with the technology they use in their everyday lives.

Do you have an innovative approach to teaching physics that involves technology? Have you used an approach similar to that which is described above? Please feel free to leave a comment below.

Chris Isaac Larnder was born and raised in Montreal. For the past 12 years he taught at John Abbott College. Prior to this he worked as a programmer in the computer graphics industry and founded the ACM SIGGRAPH Montréal, a chapter of the Association for Computing Machinery.

Chris Isaac has presented for the past 2 years at the SALTISE annual conference and presented a workshop on the 2 labs mentioned in this article in French at the colloque collégial of the AESTQ in August of 2018. He was also integral to the initiative to open a joint Centre collégial de transfert de technologie in Artificial Intelligence at his college in partnership with the Collège de Bois-de-Boulogne.

Some of the lab activities mentioned in this article are the subject of an upcoming article in the American Journal of Physics.