Cite It! A Tutorial to Help Students Cite Sources Correctly

Dr. Anna Woodrow, a Humanities teacher at John Abbott College, knew that her students, especially first-year students, had difficulty citing sources and often became discouraged because they had no idea where to start. They couldn’t find useful and easy-to-use tools on the Internet. Anna had the idea to create a tutorial and applied to the CCDMD’s Call for Projects. Her project was accepted, and I am the project manager that has been helping her bring her idea to life.

When talking to colleagues about this problem, Anna realized that students in other disciplines were experiencing the same thing. She envisioned an online tutorial that could be used in class as a teaching tool, or simply be used as a reference for students who were already comfortable citing sources. The Cite It! interactive tutorial features 4 documentation style guides: MLA, APA, CSE and Chicago. Relevant to all disciplines, it can be used in class, at home, on smart phones and tablets.

In the early days of the project, a plan was created and a consultation was held, which included both teachers and students, to validate the idea. It passed with flying colours and the consultation group gave helpful suggestions to improve upon the initial idea. For example, it was suggested to include referencing sites that ‘do it for you’, such as citethisforme.com and Zotero, to name but a few. They also wanted a reference document that could be printed for each documentation style. Both of these requests were met. The reference documents are called Coaching Cards and include everything one needs to know about documenting in a particular style. 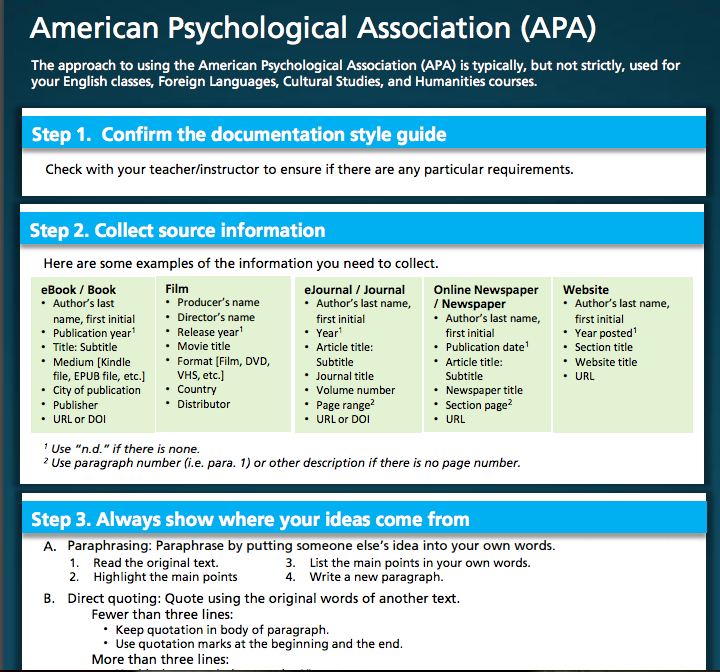 A printable Coaching Card for the APA citation style

Anna wrote the content for the 4 featured documentation styles, and her peers (teachers from various disciplines and colleges), reviewed Anna’s work. Changes were made to the content, thanks to the helpful input from these reviewers.

We then hired an instructional designer, who used the program Storyline, from Articulate, to make a prototype. The prototype was validated with over 300 Humanities students. In total, over 1000 John Abbott students have been exposed to the tutorial. Finally, Anna’s students at Cégep@distance have also been encouraged to use Cite It! All of these students have provided useful input. Once the prototype was tweaked, teachers from other disciplines, as well as colleagues in Humanities at John Abbott, tested it out. Some students brought their smart phones and tablets to class, and more tests were done to ensure it met the needs of as many students as possible. More tweaking was done until we were satisfied with both the look of it and the content included in it.

The content, for each documentation style, is as follows:

Each of the 5 steps is explained in detail, with accompanying practice exercises. The tutorial also includes voiceover narration, and the text appears on each screen as well. These were added to meet the needs of students with learning disabilities or those whose first language is not English.

The 5 steps included are:

Once the student has completed the 5 steps, he or she can do a test your knowledge quiz to see what has been learned. It should be noted that this quiz can be done at any time during the tutorial: at the beginning, in the middle or at the end. Depending on the student’s knowledge, he or she can choose when to do the quiz. However, a student can do the 5 steps and/or complete the quiz. Once the quiz is completed, a summary is provided which tells the student where his strengths and weaknesses lie. The student can then go back and redo the exercises that caused problems, or consult the coaching cards to use as a reference. The student therefore gets a clear portrait of his level of mastery in citing sources. A summary and quiz are available for each documentation style guide, and students can change from one style to another with a simple click.

Here is a sample from the Test Your Knowledge quiz. 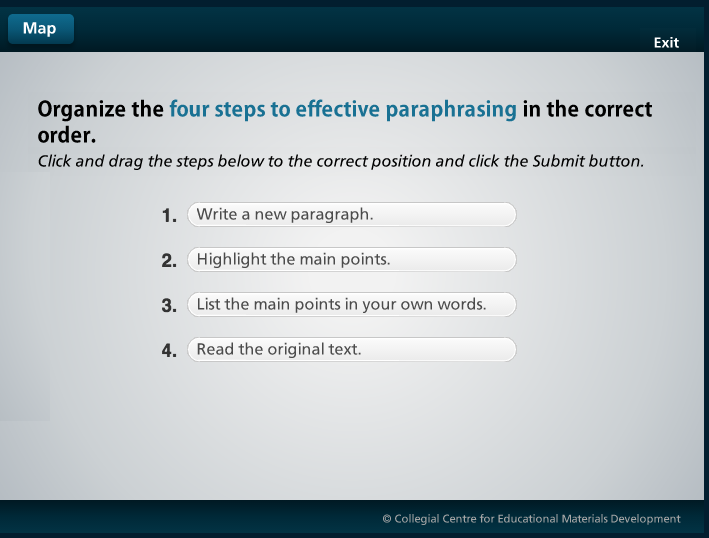 An example from a ‘Test Your Knowledge’ quiz

The student chooses the answer(s) and then clicks SUBMIT. The correct answer is given immediately and appears on screen in a separate window. There are 10 questions in total which are randomly chosen from a question bank. At the end of the quiz, the student receives a mark (in percentage) out of 100% and gets feedback on areas that need more work. The student can redo the quiz as many times as they desire, so he or she can go back, practise and redo the quiz. Some teachers may even want to make this a requirement to ensure that students are on the same page and know how to cite sources correctly.

The CCDMD guided Anna and the instructional designer through the production process, and the idea finally came to life thanks to hard work, consultations, reviews, in-class testing and reworking the tool. It is available free of charge to students and teachers in the college network. At this point, the MLA and APA style guides are functional. By September 2016, the CSE and Chicago styles will be available. The tutorials are in English, but there are also plans to have it adapted for the French network.

Paulette Cake has been with the CCDMD since 2010, developing resources in English. She has an ESL degree from Laval University, has been a textbook editor, and also worked at the MELS in evaluation.

Using Portal to Explore Plato’s Allegory of the Cave

For the last three years, one of the main tools that Jonathan Mina has used in his Humanities course is a video game called Portal. Although some would call[...]