I have always found that the teaching of Physics was much too centered on calculations rather than on the understanding of phenomena. It is not an unusual occurrence to find a student capable of doing complex exercises, but unable to answer a simple theoretical question. I would imagine that all Physics teachers sincerely aim to inculcate a firm theoretical understanding of the basic concepts of the science in their students rather than simply enabling them to unknowingly plug the right figures into formulas. This goal is now attainable through the use of clickers in Physics classes dealing with theory.

Classes of Theory in Physics meet for two hours every second week. At these times, PowerPoint presentations containing multiple choice questions which can be solved with no calculations are introduced. The equations linked to the topic being discussed are also written on the board in front of the class uniquely for the purpose of helping the student to correctly deduce the reasoning required to answer the question. Here is an example of such a question:

A battleship simultaneously fires two cannonballs. Their initial velocities are not necessarily identical. The cannonballs follow the two trajectories indicated in the drawing. Which one will reach its target first?

Drawing of the cannonballs trajectories.

a) A
b) B
c) They reach their target simultaneously.
d) It depends on the initial velocities of the cannonballs.

Of course, given the initial velocity and launching angles, the answer to this question can be determined by calculating the time required for each cannonball to reach its target, but with a little thought, the answer can also be determined using only logic.

Students individually try to solve the question for about two or three minutes. Their responses are recorded using clickers. 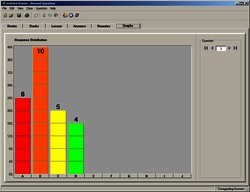 I use software called ‘Beyond Question,’ which was provided with my clickers, to see when all students have answered and how many students have selected each response. With these figures at hand, two options are possible after the results are announced:

It is not always necessary to have a discussion. If more than 80% of the class responded correctly, a rapid explanation for those in the minority will suffice before moving on. If practically no one got the right choice, on can provide futher information in the form of hints or directly ask those who did succeed to explain their reasoning. Occasionally, a student will tell you their answer is the result of a guess, but sometimes a very sophisticated correct explanation will emerge.

Obviously, student interest cannot be maintained without grades linked to the understanding of basic concepts. On my exams, fifteen theoretical questions appear, counting for two points each. Students are aware that this type of question will be on the test and try hard to understand the reasoning that led to the correct response. If you want to see examples of theory questions (in French) used in the exams, they are available for the three Physics courses on the site – La physique à Mérici.

Have you done something similar in your courses on theory in Physics or in another subject? Share your ideas and comments with Profweb readers by using our Reader Response Feature.

In case you were wondering, it is Cannonball B that arrives first at its target!

He has taught Physics since 1994. He was awarded with an Honourable Mention from the AQPC in 2011, the Minister of Superior Education, Research and Science Award (resource in French only) in 2014, and the Award for Excellence in Teaching Physics from the Canadian Association of Physicists in 2017.

The course notes that he has put online are read all around the world and are used in various other schools, notably universities.

Combining a traditional method with sessions dedicated to conceptual questions, Luc Tremblay has also put in place a problem-based approach in the course carrying the final summative examination of the Natural Science program.

He has also been coordinator of the Natural Sciences program for 9 years and has participated twice, as a consultant, in the efforts of the Commission d’évaluation de l’enseignement collégial.

He is involved in the student life of his college. Player in a cosom hockey team, he sometimes organises demonstrations of Galileo’s Law of Fall with pumpkins on Halloween.