This Real Life Story was first published in French.

After some 15 years of teaching, I decided to create my own course notes. I used Word (with MathType) for the writing, and saved the files as PDF. I used PaintShop Pro to create the figures. I integrated clickable hyperlinks in my notes, which gives them a an added value when read in their digital format, but they can also be used in a printed format. Besides, that is what students prefer to do. My notes are online on my site, La physique à Mérici (resource in French only), and are accessible to all.

How I got here

I teach Physics. A large number of textbooks are available on the market for that discipline, but there are always things that I explain differently and there are often parts of the books that I like less. Around 2010, I rewrote some chapters of the textbook I was using in order to hand them out to students, telling them that the content corresponded better to what would be seen in class. In the fall of 2011, I decided to write the course notes for my entire Mechanics course. Everything went so well that in September 2014, I had written the notes for all 3 obligatory Physics class in Natural Sciences and the notes for an Astrophysics class, including exercises and their answer keys. That represents close to 4400 pages. I think I have done good work since I won the Prix de la ministre (resource in French only) in 2014 for the Mechanics notes and the Award of Excellence in Physics Teaching from the Canadian Association of Physicists in 2017 for my whole body of work. And all of that without release time! 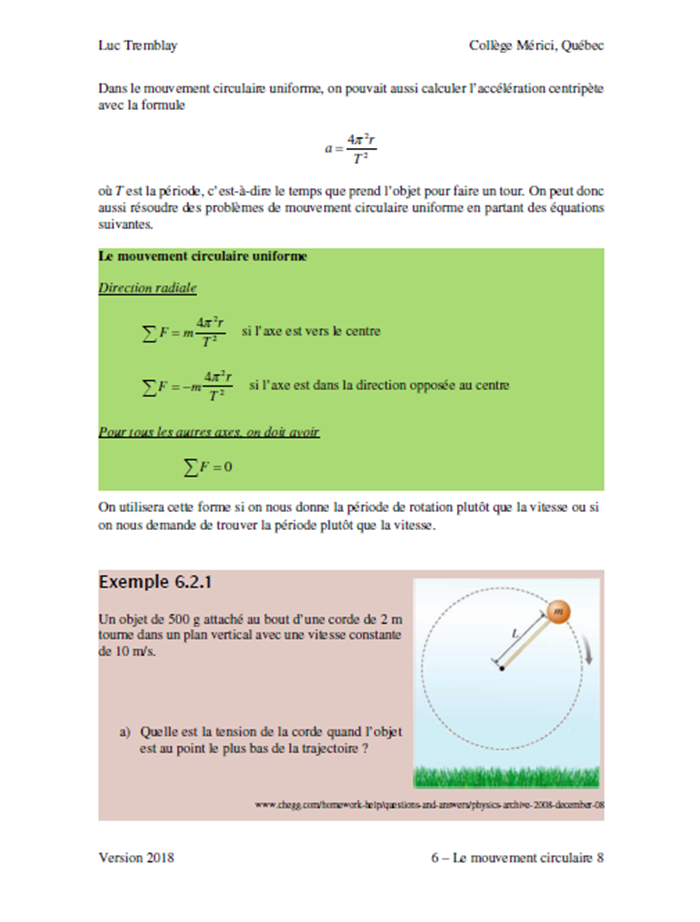 A page of the course notes for the Mechanics course

Differences between my notes and the offered textbooks

My notes differ a little from the textbooks. Obviously, they contain text and examples, but there are many more explanatory figures. There are also links to videos that illustrate different physical phenomena. These are not clips of teachers explaining something, these are clips where we can see examples of the phenomena discussed in the text. For example, there is a clip that shows that all objects in free fall fall with the same acceleration.

I show the videos in class, and the students can re-watch them as often as they want using the links in my notes. (I write the full addresses of the videos, rather than “hide” the hyperlinks in the text, so that students can still access the videos using a paper version of the notes, by typing the address into a browser.)

iPads in the classroom?

At the beginning, there was an iPad project in the Natural Science program at Mérici College. All the students in the program received an iPad. I had started to write some of my notes to contribute to that project. On my website (resource in French only), the students had access to the notes, the exercises, and the answer keys directly on their iPad. They did not receive the notes in paper form. (I also note that, when there was complementary information that the students wanted to note, most of them wrote on paper rather than on their iPad.)

As the notes were in large part identical to what I was to teach (same explanations and examples), I was afraid at first of becoming the teacher that only repeats his notes, which makes it unnecessary for students to show up in class. It could have happened, but it ultimately was not the case.

With the course notes identical to what is presented in class, students no longer have to write down everything. This improves considerably the speed at which I can present content. I use PowerPoint presentations created from my notes, which means that I almost never have to write on the board. And the students can focus on what is presented and not on taking down the entirety of my lecture which they would try to understand later.

The time saved allows me to integrate other activities to work on the understanding of Physics concepts. I use the time to ask conceptual questions to the students.

The students use the text

I have noted an important difference. Before, my students would very rarely read the textbooks. They used them for the exercises but would not read the explanations. They would rather read the notes that they had taken in class, notes that were not always clear. With my course notes, they really read the text. Certainly, the text in the notes is shorter than that in a textbook, but not terribly so.

Anyone in the world can have access to my notes (in PDF format) on my website. I could have chosen to protect my website with a password, but I have decided to leave it open to all. Besides, I can have a look at my clicks through Google Analytics and see where the people that use my site are located. Occasionally, I receive an email to thank me (about 30 since 2013). Some teachers ask me if they can use a part of the entirety of the notes for a course, and I always accept, with pleasure. Others use it without asking for permission, which does not bother me at all. The notes are there to be used.

Overall, I am very satisfied with my work. I now have notes that correspond exactly to my way of explaining Physics and that give me enough time to integrate other activities in my classes!

He has taught Physics since 1994. He was awarded with an Honourable Mention from the AQPC in 2011, the Minister of Superior Education, Research and Science Award (resource in French only) in 2014, and the Award for Excellence in Teaching Physics from the Canadian Association of Physicists in 2017.

The course notes that he has put online are read all around the world and are used in various other schools, notably universities.

Combining a traditional method with sessions dedicated to conceptual questions, Luc Tremblay has also put in place a problem-based approach in the course carrying the final summative examination of the Natural Science program.

He has also been coordinator of the Natural Sciences program for 9 years and has participated twice, as a consultant, in the efforts of the Commission d’évaluation de l’enseignement collégial.

He is involved in the student life of his college. Player in a cosom hockey team, he sometimes organises demonstrations of Galileo’s Law of Fall with pumpkins on Halloween.

Physics courses can lead to the understanding of phenomena rather than the rote use of formulas!