Distance Education at the Service of Student Athletes: The point of view of Keven Bouchard

During the winter 2016 semester, I spoke with 2 teachers from the Cegep de Baie-Comeau who had experimented with distance education to support a student athlete with this college studies, while based in a different Canadian province. Their account was the subject of a recent Profweb publication.

This article intends to reveal the point of view of Keven Bouchard, an aspiring professional hockey player and final-year student in Natural Sciences at the Cegep de Baie-Comeau in the winter 2016 semester. With the support of his CEGEP and the Alliance Sport-Études, Keven had a distance education experience “made-to-measure” to allow him to complete his college studies and to obtain his Diploma of College Studies (DEC). I met him on Skype, for an interview conducted in April 2016. Here is his story.

Can you describe the college path you have taken?

I am completing my third year of a DEC in Natural Sciences. It is a 2-year pre-university program.

For 2 years in Val-d’Or, I did half of my college studies and during the summer, I took 2 courses. Presently, I am also taking a French course with Cégep à distance.

While I was in Val-d’Or, I asked to be traded, but I specified that I did not want to end up in the Maritimes, as they do not have CEGEP in New Brunswick. This would mean that I would have to take a break from school. I was therefore very happy to learn that I had been traded to Baie-Comeau.

Once at the Cégep de Baie-Comeau, I mentioned the same thing to the General Director of the Quebec Major Junior Hockey League (QMJHL). Finally, I learned that I was leaving for Moncton just before the Christmas holidays. As soon as I arrived in Moncton, I was immediately looked after and they told me not to worry, as I could continue with my college studies. 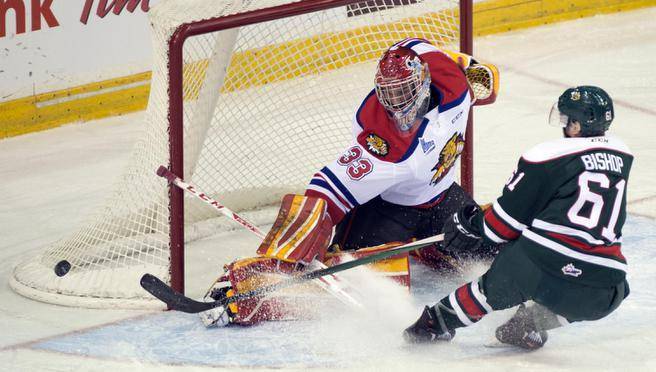 Goalie for the Wildcats (source : The ChronicleHerald)

When All of the Planets Align…

The moment I knew I had been traded, I contacted the Cegep de Baie-Comeau to see if I could continue with my college studies. The pedagogical counsellor of the Drakkar, James Laviolette, had taken all of the necessary steps so that I could finish my DEC while based in Moncton.

I still had one Math course and one obligatory Physics course to complete in order to obtain my diploma. During the fall 2015 semester, I had already taken courses with Catherine Hudon and Pierre-Marc Robinson, who teach these 2 subjects.

When the pedagogical counsellor announced my transfer to Moncton to Pierre-Marc Robinson, he suggested: “Why not teach the course through Skype?” Catherine Hudon was thrilled at the idea and she was also willing to give her course using videoconferencing and by distance.

Is it a challenge for you to keep your motivation, when you are alone by distance?

I always had the objective of completing my DEC in 3 years. I was drafted by the National Hockey League (in Edmonton) and I could have received a contract offer by the American League as early as the fall 2015 semester. If that had been the case, it would have been almost impossible for me to continue my studies at the same time. I decided to wait. I found it was important to pursue my education objective and to receive my diploma in the winter 2016 semester.

When I was traded to Moncton, the teachers showed a great deal of open-mindedness. Both teachers knew that I dreamed of having a professional hockey career. I am very aware of the importance of also having a solid college and university education. It is one of my priorities. I would say that having a career as a professional hockey player is my plan A, but if ever that does not work out, I will have a plan B and I will be able to achieve my professional project in another way.

How are the classes held, from a technological side?

I use a laptop computer to connect to my classes. It is not always possible to do this for a class when I am on the road. On the bus, there is only one Wi-Fi connection for 30 players! This creates problems with the band-width at times. Another problem is the lack of space to set myself up and follow the class while I am travelling.

You are currently in the series, is it more difficult to stay connected?

Before the series, I communicated with my teachers to catch-up on classes the week before my departure, to not get too far behind. The fact of leaving for 2 series’ games, from Moncton to Gatineau, will make me miss about 1 week of classes.  An athlete does not only play hockey in a day. Often, the time required for preparation and concentration for a match can add on several hours. Both teachers are very flexible with respect to handing in assignments and even exam dates.

How do the guidance and the support from the teachers unfold?

Usually, I devote a minimum of 1 hour per week on Skype for guidance and support from the teachers, but often it lasts much longer than that. We are talking about Mathematics and Physics, which are rather difficult courses! I am more often absent for Pierre-Marc Robinson’s classes, because they are held on Thursdays at the same time as my team practices.

What is the method for handing in your assignments?

I hand in my assignments by fax or by scanning them into an electronic format, because the exercises are often a series of calculations done by hand. For the Physics labs, I will do them at the end of the current hockey season.

The teachers told me that while they are moving around in the classroom, they realise that sometimes they are no longer in the camera’s field of vision. Does this bother you?

There is no doubt that it is not easy for the teachers. I understand that this is a first for the teachers and they could not plan in advance. In addition, before each class, the teachers prepare the computer, go on to Internet, test the system to ensure that everything is ok, etc. I am aware that they are already doing a lot in order to allow me to take their courses by distance and I appreciate it.

I hear well during the class, but I do not always see the board well. I try to understand by myself. If not, I have a good friend in Baie-Comeau and when I am missing notes or when I don’t see well, I can ask him to send me the documents (notes, photos of the board, etc.).

Tell me about the collaboration with the representative from the Moncton Wildcats team?

The representative takes care of all of the players on the team. They come from different education systems. The needs of the players are many, because they are from several Canadian provinces and even different countries (the United-States, for example). The other players have distance education courses and the team provides a classroom for school work, tests and exams. The representative is present to help players. This individual also supervises the exams and other evaluations, when needed. Then, the representative forwards them by fax to the appropriate teacher.

You are registered at the Université de Québec in Chicoutimi (UQAC). Have you inquired about the possibility to take Bachelor Degree courses by distance, in case you are not in the area in fall 2016?

I could probably do my Bachelor Degree at UQAC by distance, but when a player reaches the professional hockey level, his schedule is too busy and he wouldn’t really be in a position to take courses at the same time.

What will you take away from your experience with distance education?

Distance education proved to be a positive experience for me. It is a good solution to reconcile studying and elite-level sports. Without this option, it would have been impossible for me to complete my college education this year. Education has been my priority since I was young, but I also had to make professional choices: taking a break from hockey for several months is impossible, however I can return to education at any time, and even more easily by means of distance education.

Hot Off the Presses

In September 2016, Keven is completing a NHL professional training camp with the Edmonton Oilers. He is continuing his studies at Moncton University in the Electrical Engineering Program. He is still playing hockey at the junior level with the Moncton Wildcats.

He is originally from New Brunswick and recently obtained his Master’s Degree in Educational Technology at University de Laval. He has more than 25 years of experience in the field of teaching and is specialized in the field of computers. In addition to teaching computer courses (repairs, programming and productivity and business applications) at the secondary level, he also teaches leadership courses to educate youth about the importance of being a good leader in the world of tomorrow.

During the winter 2016 semester, Catherine Hudon and Pierre-Marc Robinson, Teachers at Cégep de Baie-Comeau, were faced with an unusual situation: one of[...]