From Character Blogs to VoiceThreads: Exploring Points of View

The vast array of free online tools that allow users to combine images, video, music, voice and text have spurred a wave of digital storytelling as the ancient art of weaving a good yarn is reinvented for the digital age. While I was experimenting with some of these e-tools, I thought it would be interesting to find ways for students to explore literature and their own beliefs from different points of view. I have selected two assignments I used with advanced-level students that worked well to improve writing and pronunciation skills: character blogs and This I Believe recordings.

I have used blogs in my classes in various ways over the last seven years. This time my goal was to have students crawl inside a piece of literature and write a blog post from a character’s point of view.  I tried the exercise two different sessions with two different works of literature: Oscar Wilde’s The Importance of Being Earnest and Lewis Carroll’s Alice’s Adventures in Wonderland.  Both worked well.  I used Blogger (www.blogger.com) as it is quick, free and easy to set up.  Before the students created their blogs, I first asked them to create a new email address so that they could create a character profile that would be independent of any other social media they might be using and to protect their anonymity.  A few students preferred to use their own email address, but most of them readily created a new account. 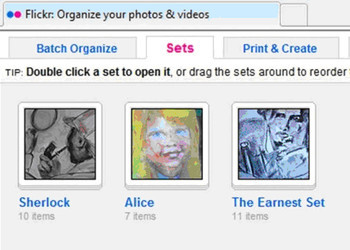 I had students work in groups of about six with each member choosing a different character from the play or novel. One member of each group had to create a new blog and then send invitations to the newly-created email addresses for the other members and to me. I made sure that the “owner” of each blog gave me “admin privileges” so that I could help the group outside of class or delete any inappropriate posts, if necessary. As it turned out neither were necessary, but I would still recommend that teachers be sure to get the admin rights. Once the team members had accepted their invitations, they created individual profiles and uploaded a picture of their character. While students could find pictures from a variety of sites, I simplified the search ahead of time by creating my own sketches of the characters and posting them on Flickr. This was a creative outlet for me and also a way to avoid potential copyright violations. I made an Alice set, an Earnest setand a Sherlock set. Some students used my sketches and others found their own images.

For Earnest, I asked each group to choose a scene near the end of the play or to invent a scene that could take place up to ten years after the play ended. For Alice, I had them imagine it was the evening after the mad tea party. In either case, students were to write a journal entry about the particular scene in the first person from the character’s point of view as a homework assignment and bring a printed copy and an electronic copy to class the following week. During the next lab period I had them copy and paste the electronic versions into their blogs and then comment on the blog entries their teammates wrote. When students were all on task, the comment feature allowed them to engage in an extended text chat as the characters. One group had a 42 comment exchange! The printed copies of their journal entries were collected, corrected and marked as a written assignment. The following week students made necessary edits in their blog entries. 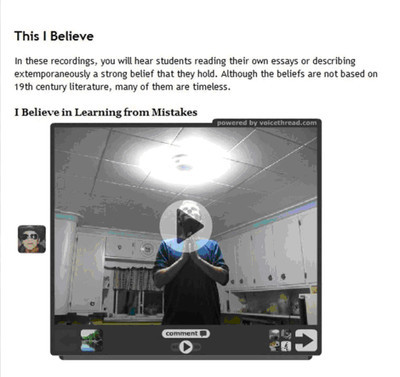 This I Believe on VoiceThread

A very useful online tool for listening and speaking practice is VoiceThread, described on the website as a collaborative, multimedia slide show that holds images, documents and videos and allows people to navigate slides and leave comments… Educators can apply for a free account that can store up to 50 recordings. This tool offers an excellent opportunity for students to record themselves, listen to and critique their own voice and then share their recordings with others (in or outside of the class).

“This I Believe” was a popular radio program in Europe and the US in the 1950s and then picked up again in the US and Canada a few years ago. Celebrities and “normal folk” record themselves reading their own essays about something they believe in strongly. Following a very animated class discussion about a controversial topic, we explored written and oral essays from the CBC and “This I Believe” websites and discussed topics that got the students fired up. They were given a few weeks to work on their essay and find pictures that illustrated their beliefs. After the essays had been corrected, returned and revised, the students uploaded their pictures to VoiceThread and recorded themselves reading the essay as they moved through the slides. Some students made the recording in one take, and others re-recorded themselves over and over until they were satisfied. Then they were all asked to leave a comment (oral or typed) for at least one of their classmates.  I was pleased by the range of topics the students pursued: learning from mistakes, the power of music, post-apocalyptic scenarios, the importance of voting, protecting sharks, following goals, aviation, hockey, and even, the respect that students should give their teachers! Some of the recordings are posted here.

In my end-of-session questionnaire, one student wrote this comment about the assignment : I liked it. I can imagine what it’s like to be a newscaster-it must be hard for them not to make mistakes. Another confessed, It was good to speak about something that really gets to me, and I got to hear what my English sounds like. Weird.

Over the session, I experimented with a variety of digital storytelling tools and found ways to incorporate them into my class instruction. Stay tuned for more ideas. In the meantime, there is a tab for Web Tools in the class blog I used this session (www.wildly-earnest.blogspot.com ) that summarizes some of these forays.