Getting Beyond the Equations

My practical teaching style means I am sometimes surprised by how students can push their own learning when they are motivated. Beyond a basic lesson plan, I observe how students interact with concepts in the classroom and try to teach in response to what I am seeing, often with information technology. One challenge with IT is to discover how the modern generation learns. Their relationship with technology is often very different from my own.

Kevin at the demonstration of Jacob’s Ladder (6:45)

My students easily work in groups helping each other out, for instance while working on problems from our Webwork physics library. This online assignment tool provides students with similar problems containing different variables. Initially some students don’t even understand how to get the technology to work and the collaborative sessions often start out chaotic, but eventually it all begins to coalesce because the students learn quickly. New physics labs at Vanier have been designed to promote this spirit of interactive discovery. 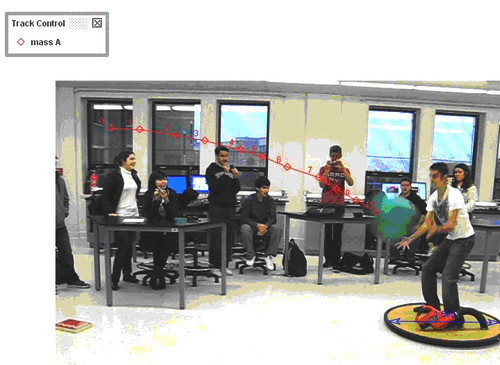 Since long before IT entered into the equation, the Physics department has used demonstrations to illustrate physical principles. One of my favourites is a small hovercraft that students can ride on, the air cushion provided by a leaf blower. Many direct demonstrations are found in our Physics Arcade located outside of our classrooms. If the students are actively involved in their learning, they are often more motivated.

No matter how direct the demonstration, however, students have trouble relating motion around them to the physics they learn. All of us have ingrained concepts about how the world works, and often this “common sense” is wrong. One of the goals of physics education is getting students to move beyond their preconceptions to a Newtonian model, where they are constantly aware of the forces operating in the environment.

This sounds very sophisticated, but actually it is a lot of fun. One exercise involves taking groups of students out for a lab and asking them, either with their cell phone cameras or a camcorder to film motion in their environment. Examples include cars accelerating and balls being thrown or bounced from high up the fire escape.

Students take the film themselves; it’s theirs. At the lab, there are some computer programs where motion can be tracked frame-by-frame. The application we used last year is called Videopoint, but this year I discovered a shareware called Tracker which I prefer. Because it’s free, students can download it and play at home. Taking learning outside of the classroom is a big part of active learning. 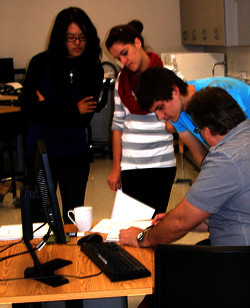 In this example, the student is catching a ball while standing on the hovercraft, in the newly designed Mechanics Lab. Note the students using cell phones to capture the video.

Students are then asked to analyze the motion using the position data as a function of time to find velocity, acceleration and net force. The students start from the basic definitions and program them in Excel from scratch. Through this process they come to understand the interplay of factors that generate the resulting motion of the object that they have captured on film. This is really the students’ introduction to Physics!

The definitions that they use are non-calculus based so that the programming in Excel still provides the satisfaction of seeing the results in action. What we’re actually doing is looking at the fundamental characteristics of acceleration and trying to describe them mathematically in a way that is not dependent on the less intuitive shortcuts afforded by the use of calculus. But what is encouraging as a teacher is when students start to make deep connections between this process and the calculus they are often learning concurrently in their math classes.

There are many IT demonstration videos available for use in the Physics classroom. But I realized that students are often more motivated by the rather un-academic examples of motion to be found on YouTube. One of my favourite clips is of a basketball player dunking a ball into a hoop, as an example of rotational kinematics. I had a student basketball player, who transferred this concept for a biology class by performing a short study of different team members repeating a drill. The study attempted to analyze whether the the angle of the knee bend affected the efficacy of the movement. I was impressed by how technology can let students unleash their scientific creativity.

Many of us in the Physics Department at Vanier are doing a lot of unique work with Webwork. We have been developing a Physics library at the college level not only for regular students, but also for technology programs such as Architectural Technology. One thing that I am trying to do with WebWork is to bring an element of play into the problems. One way of accomplishing this goal is to incorporate simulations involving at least two variables. Ideally, students should play with more than one parameter in order to get a deeper insight into how the parameters interact. I know that a particular simulation is a keeper when students answer the associated questions but then cannot resist playing with the functionality of the simulation.

Students interacting over a problem in the lab

We sometimes use the phrase in Physics: “working from first principles”. This means that you start from the most basic definitions and laws and explore and expand a subject from there. I really want students to get back to first principles in Physics because students often lack the connection between what they’re learning in the classroom and their everyday lives. Over the years, I have discovered that getting students actively involved in their own learning is the best way to accomplish this goal. IT has definitely become an important tool in allowing my students to independently discover the workings of the physical world.

He is a Physics Teacher who has been at Vanier College for the last 11 years. For the last 7 years, he has been organizing pedagogical activities in active learning classrooms. Thanks to PAREA grants, he works in collaboration with teachers from other colleges to improve the integration of technology into the classroom. His research team studies how students are using the technology. He is also active as a member of the executive committee of SALTISE, an organization that promotes new pedagogies in the classroom. Kevin is a member of the Editorial Committee of Profweb and an occasional contributor.