Doreen Kelly began working with two Computer Science students, Mathieu Refghi and Joseph Pereira, to help them demonstrate their ability to solve a problem for their final project and wound up helping to create an amazing triumph of programming which could help the people learning and teaching languages in our cégeps.

Doreen is the coordinator of the Learning Center which includes the CAL (Centre d’aide en Langues) at Champlain’s Saint Lambert Campus. Her professional life with CAL could be said to have two historical periods; I’ll call them the B.S. Period and the A.S. Period. B.S. stands for ‘before software’ but its relationship to a more common abbreviation for these letters is not totally unwarranted!

Before the software, every student who was taking lower levels of French as a Second Language appeared on a class list. An individual sheet was made for each name on this list for CAL which would have spaces for the number of visits, their dates, the exercises done, the teacher and several other categories. The student names themselves were attached with self-stick labels. Students coming to use the service would sign in to confirm their presence, and a tutor or monitor would go into their file and take out the given sheet. The students were also given another sheet to complete for each of the exercises that they did which was transcribed by the monitor who would attach the individual exercise sheet to the first overall tally sheet which would be placed in the student’s file for eventual examination by the professor in French as a Second Language when they had the time to physically come to the center. The monitor’s job was as much administrative as pedagogical.

Almost by chance, two students in Computer Science, Mathieu Refghi and Joseph Pereira, approached Doreen to see if they could work with her to streamline her operation as part of their final project. Jokingly, she said, “Make the paper disappear,” and amazingly they did! She started with a few minor requests to eliminate paperwork, and the results were startling. As time went on, she would ask for the impossible and have it delivered the next day. She entered her A.S. period and never looked back.

Probably the best way to explain what happens is to look at the procedure that students now follow at the Saint Lambert campus punctuated with occasional glimpses of input from the FSL Department, the monitors and Doreen.

At the heart of it all is the French language. Among others, Johanne Campeau, the head of content in CAL, and Colette Noël, the coordinator of Champlain’s FSL Department, have assembled an impressive and evolving collection of exercises from a variety of sources both on-line and software-based. Students are required to visit the CAL a minimum number of times.

When the new semester starts, student lists are transmitted to Doreen from the school’s database in the form of Excel files. The CAL software imports them and automatically prepares class lists with teachers’ names. The teachers meanwhile have prepared a list of exercises for each of their competency levels, and the software makes the appropriate link between the class and the selected exercises. The system is now ready to greet the new students. 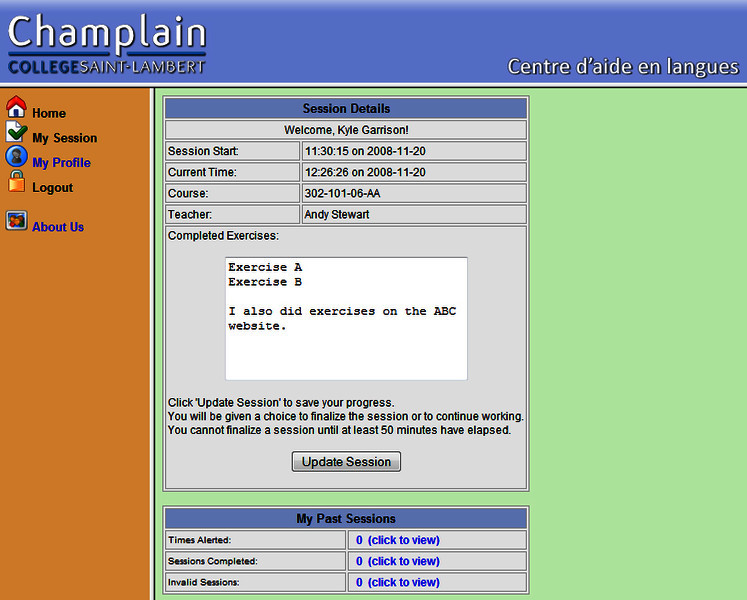 The student is greeted at the entry by a student monitor. They are asked to sign a register simply to confirm their attendance in hard copy in case of a problem. From that point on, the entire procedure is paperless, and even this procedure is just to cover all bases as the number of times there has been any discrepancy whatsoever could be counted on the fingers of one hand.

The student goes to a page and logs in with a password generated by CAL. This is done for convenience as it allows the CAL to automatically create all necessary student records in the CAL system, while facilitating the first login for the students. Beyond the initial login, students have the option to change their password whenever they like and are encouraged to do so. The student session screen displays the exercises to be done as well as a record of which work has already been accomplished. 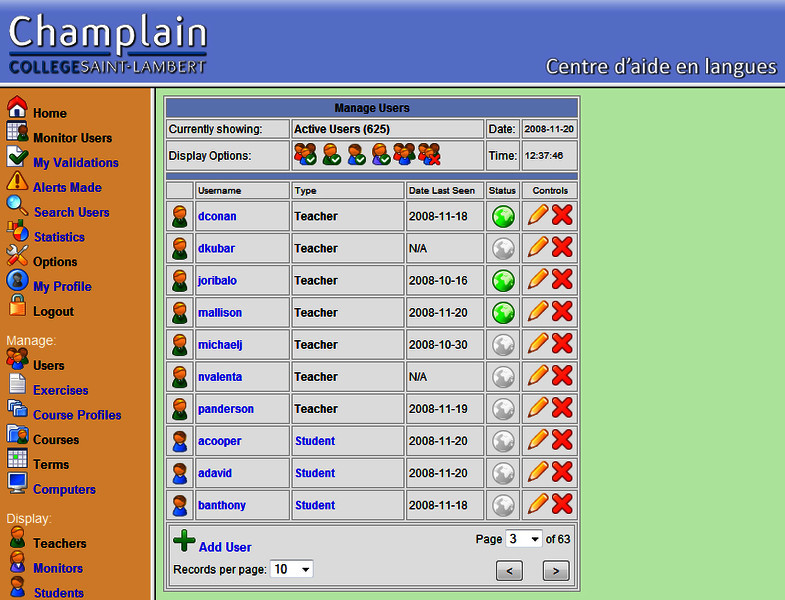 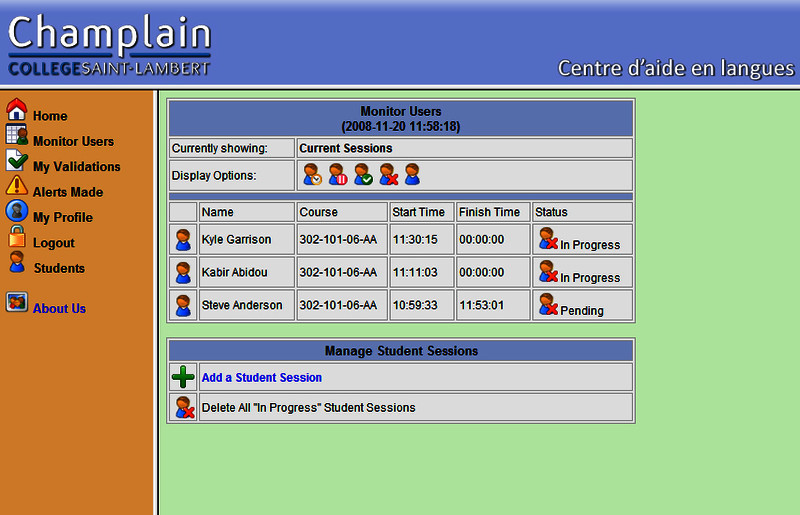 Once the student finishes their session they log off and return to the monitor’s station. The monitor must validate the work for it to appear as a credit in the student’s record. If the monitor feels that the student has not been on-task, they can refuse the session and write a note of explanation which is visible to their teacher. The monitor also has the option of defining an alert, which will appear the next time the student logs in. This can be useful to convey a message to the student about their previous misconducts. 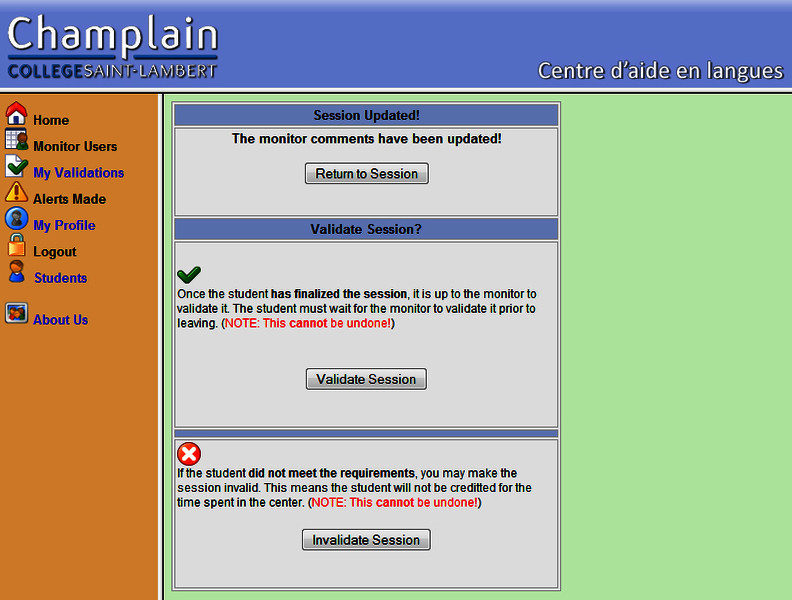 Validation of the student’s session

The teacher receives a detailed record of each student’s progress which is accessible on-line from any location. Teachers can easily use this information to make decisions regarding student progress particularly in cases where the grade is really close to passing. 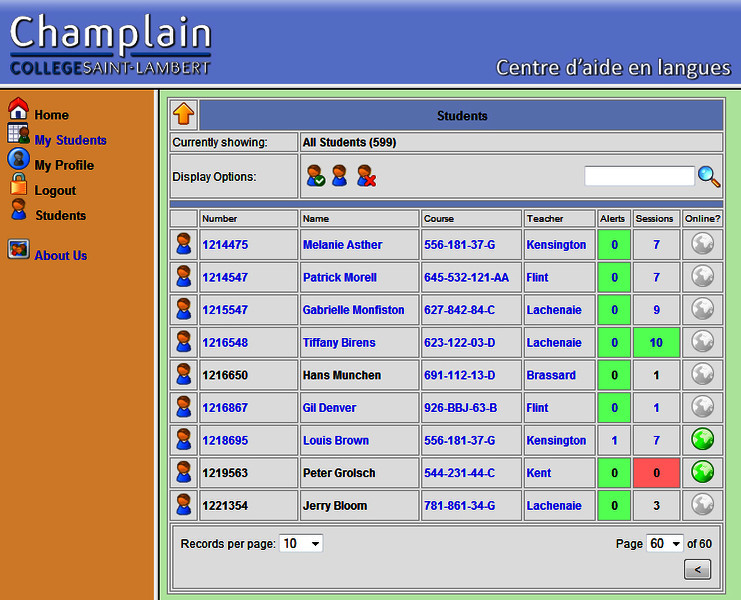 As administrator, Doreen receives detailed statistical information on traffic flow, resource use and any other information that she could require. This is all in a form that is graphically sophisticated and accessible on demand. 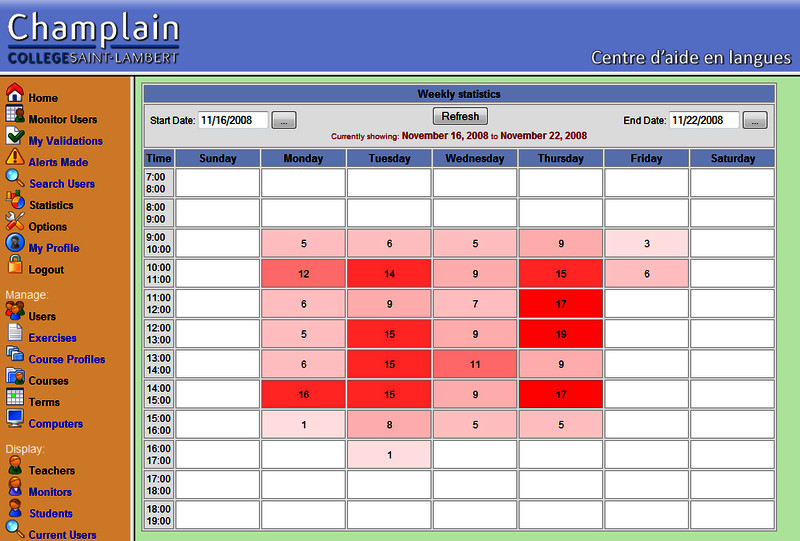 The reduction of paper and paperwork has changed the way that the Centre d’aide en Langues functions. Monitors are far freer to concentrate on student needs and students are freer to concentrate on the material at hand rather than the forms to be filled out. For Doreen’s part, she’s more effective, refining work schedules and better responding to needs because she has any information she needs without the serious drudgery that used to be required to generate it. 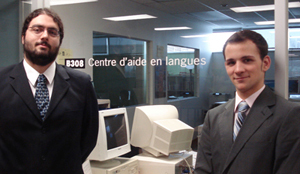 Mathieu and Joseph still come in to tweak the installation in CAL, but they used their experience acquired in producing the original system to produce a successor of their software with the working name of CAL v2 which can be used by other language departments. This successor of the CAL system is brand new – the core of the application is designed to be flexible, secure, and efficient. Also, the overall visuals will be very different, but it still takes its inspiration from the original! You can contact them online at http://www.mattrefghi.com/projects/cal/.

Use our Reader Response Feature to discuss similar B.S. situations that exist in your school. Has IT played a role in resolving the problem?