In this article, I describe a classroom experiment I recently did to determine whether using Peer Instruction (PI) with ‘clickers’ would be advantageous at John Abbott College (entire text of the PAREA study). PI is a student-centered, instructional approach developed at Harvard by physicist Eric Mazur. E. Mazur, Peer instruction : a user’s manual. (Prentice Hall, Upper Saddle River, N.J., 1997). In PI, students frequently use wireless handheld devices (aka. ‘clickers’) to provide instructors with real-time feedback which is then used to shape the instruction.

Peer Instruction involved changing the structure of my physics courses. I now present brief lectures (approximately 10 minutes, within limits of average adult attention spans) followed by ConcepTests: multiple choice conceptual questions having misconceptions as possible choices. Students simply press their choice number on the clicker and the data is transmitted to my computer. I then have instant feedback, assessing in real-time the exact percentage of the class having the correct answer. But more importantly, I also get to know the percentage of students holding each misconception. With this feedback, if the correct response rate is very high (>80%), my students have well understood the concept, and I may simply address the remaining misconceptions that 20% of the class believes before proceeding to the next concept. If, the concept is poorly understood (< 30% of correct answers on ConcepTest), I revisit the concept and explain further before resubmitting the ConcepTest to the group. Most frequently, the rates of correct response are neither very high nor very low. When moderate response rates (30%-80%) are obtained, students are asked to turn to their neighbour and try to convince them of their choice, the Peer Intruction per se.

This discussion forces students to formulate their thoughts clearly and better represent the concept. Furthermore, students may be better equipped than instructors at understanding their peers’ misconceptions and conceptual change may thus be facilitated. After discussion, students are presented with the same ConcepTest and are asked to revote. I can then acknowledge the correct response and explain why the remaining misconceptions are wrong. The method can be charted as follows: 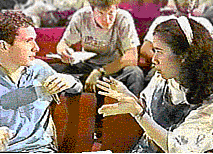 Students involved in a PI discussion. 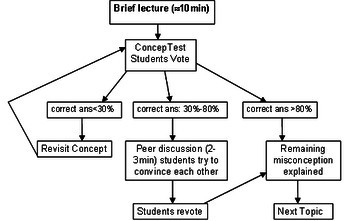 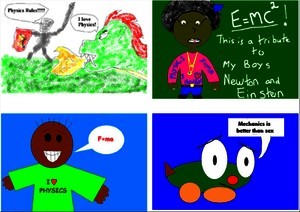 The Remaining Question: Does it enhance students’ learning?

Although administrators, colleagues and students may welcome the approach, it is important not to conflate appreciation and pedagogical effectiveness. I therefore set out to explicitly measure learning differences between PI and non-PI sections.

Many science instructors teach today the way science was taught 100 years ago.R. Beichner, L. Bernold, E. Burniston, P. Dail et al., “Case study of the physics component of an integrated curriculum,” American Journal of Physics 67, 16 (1999). Yet, the PI approach is changing the way teachers and students conceive instruction. Its methodology requires few changes from traditional lecturing. Its approach does not conflict with institutional constraints as it is well received by administrators, teaching colleagues and students. By focusing on basic concepts it has taken away the perception that science is about finding formulas integrating Simon’s notion that “the meaning of “knowing” has shifted from being able to remember to being able to find and use”. H.A. Simon, in Paper prepared for the Committee on Developments in the Science of Learning for the Sciences of Science Learning: An Interdisciplinary Discussion (Department of Psychology, Carnegie Mellon University, 1996). Through PI students are pushed to find and use the basic concepts instead of memorizing which formulas to use.