About 2 years ago, LaSalle College was looking to diversify its offering of complementary courses. The course Social Media was among the ones created at the time. Since it was a subject in the domain of Social Science, the management team approached this department to see if someone might be interested in offering the course. I was already teaching Office Productivity in addition to having a presence on numerous social media sites. So, I volunteered for the assignment.

Right from the outset of the course, I provide the rules for cell phone use in class. Even if the course is based on social networks, you still need to have some control over the technology. My students must always ask permission before using theirs.

Searching on the Internet

The majority of students don’t know how to use search tools, to do a targeted search by using Boolean operators or to search for the source of an image. I also cover the question of copyright with them:

Do I have the right to use the image? To re-use it? To modify it? Once an image has been modified, can I trace it back to the original image on-line?

I therefore explore all the different types of rights with the students, as much for images as for videos and texts.

Protecting Your Identity on the Web

I try to sensitize students to the importance of protecting their identity in this digital world. I talk about employers who are consulting the social media profiles of their future employees. I compare digital identities from 2000-2001 to those of today. The students realize just how far we have come in these last few years. We also study how to establish one’s personal and digital identity from a sociological point of view.

I give some examples of web pages with bogus content, such as dhmo.org, and ask students to critique it, to verify its credibility and to study the similarities between it and content from a more credible site. Oftentimes these sites are very close to reality.

Examples of fraudulent e-mails designed to steal one’s identity (phishing) are also studied in class. We compare these fraudulent e-mails with others that are more credible. In addition, the students learn different ways to detect whether things are true or false on-line.

I try to help students realize that social networks are important within all the various domains of society. In the first part of the semester, I placed a lot of emphasis on the last federal election campaign. The use of social media for political ends has become extremely important. We noticed that certain political parties were very active on social networks. We subscribed to the sites of the 4 major political parties to analyse their stats. We observed how they followed up on questions that were submitted by the general public. Certain political parties took up to a week to respond to the questions while others responded within a few hours.

Another subject that I wanted to cover was the student strike from the spring of 2012 and the way in which social media was used during that conflict, with equal emphasis on standpoints of the police, the students and the government.

Introduction to the HTML language

This language was introduced in class by using Komposer, a free and open source software tool. The students aren’t aware of the quantity of code that lies behind a web page. What’s good about this language is that it is relatively simple and the programming results are instantaneously shown on screen. I thought it was important that they learn the language and know how to decode HTML code, which is the basis of the web.

The Final Project: Build a Website in Order to Disseminate Research Results

I built a list of 25 questions about the social networks:

Each student needs to choose a question and then to do some research in order to build their response. I use the Weebly platform to allow them to build a site, to post their research results and explanations for these results. Weebly is pretty simple to use and offers a number of options (see: An Easy Step-by-Step Guide to Creating a Weebly Site, a Real-Life Story submitted by Suzanne Roy).

I give students different objectives to complete for their web site, such as building an interactive map, modifying the interface, creating a contact form, programming different pages related to their research project, formatting their text according to established rules, etc. Even those who thought they were not able to create a web site ended up succeeding. Here are 2 examples: 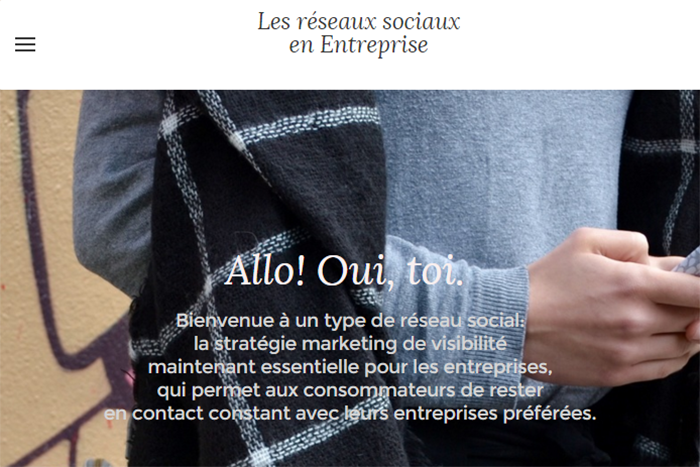 Social Networks in business (in French) 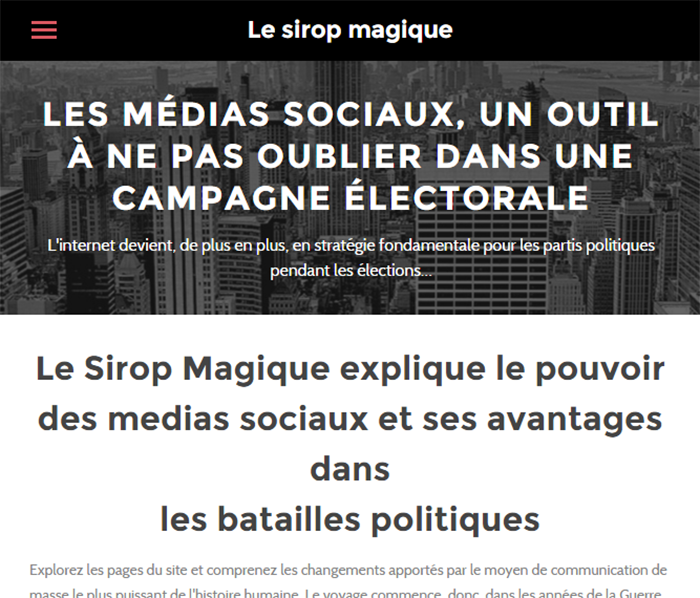 Social media, a tool that should not be neglected during election campaigns (in French)

In fact, it’s a course where I try to unlock certain computing skills within the students. They often have little knowledge of computing and office suites. All throughout the semester, I provide exercises that target the development of skills from the ICT Profile.

While covering the various topics in class, I also encourage the students to reflect upon the legal aspects of certain apps. One example is the Waze app, which is used to broadcast information about traffic on the road network in real time. While it is illegal to use a cell phone while driving, using a GPS is permitted.

I also like covering the phenomenon of computer pirates (hackers), of whom certain have honourable intentions (White Hats) while others, not so much (Black Hats).

Feedback From My Students

I have been receiving positive feedback from my students, including the former students who learned how to conduct research using different tools that were used in the course. I would like to make a few changes to the course, such as including more multimedia content to make the course a bit more dynamic. The only negative point raised by my students is that even though the course is on social networks, we still don’t use them often enough for some people.

Charles Laporte has been teaching mathematics at LaSalle College since 2011. He also teaches computing and astronomy. More recently, he started teaching a complementary course on the appropriate use of social networks. His university studies were in the field of mathematics with a minor in meteorology. He is currently working on a Masters degree in Mathematics Instruction in the area of introducing ICTs within Differential and Integral Calculus using the collaborative features of GeoGebra. A Poet in his spare time, he has previously acted as a songwriter for the Fondation Marie-Vincent.

Zotero: How to Seduce in Methodology