Team Teaching in the Virtual World

Since September 2006, Vanier College and the Cégep de Sept-Îles have been involved in a unique team-teaching experiment that has already produced innovative and enriching results. The idea behind this initiative was to enhance the learning experience of students from both cegeps by giving them a chance to meet in the virtual world. Two teachers from the Humanities departments (Sophie Jacmin for Vanier and Sharon Coyle for Sept-Iles) adapted their respective Knowledge courses to design common classroom activities. Students met online once a week to discuss what they had learned in class. Discussion groups were created within the new DECclic II platform and students debated such questions as ‘Who am I’, ‘What are the philosophical issues raised in the film The Matrix’, ‘Do we acquire knowledge through fiction, and if so, what kind of knowledge?

So begins a guest Animaweb column by Sophie Jacmin which appeared on February 26, 2007. The article, written at the beginning of a truly moving experience that enriched the lives of both teachers as well as their students, sets the stage for what follows in this account…

Profweb journeyed to Sept-Îles to hear what Sophie’s partner Sharon Coyle had to say about the project. The audio link below is Sharon explaining the reality of what she did rather than the theory. Guiding us as to what it’s like to be running a course on a teaching platform with another prof and students who are attending class hundreds of miles from your office, Sharon is giving me a tour of her interface on DECclic II. Listen in as you read the rest of the article!

Below are quotes taken from students’ final exams for the second team teaching course:

This is a class where you can actually learn things that will stay in your mind and in your way you act for the rest of your life. It is trying to break slowly barriers through the new generation.

When confronted with world views that are in conflict with my own, I start by being mad, honestly. Then I take a second to think and listen. I believe that when there is a conflict the best way is to calm down then talk.

The world view course helps us to understand the way different cultures or generations see the world. … It helps us understand the rest of the world by their thoughts and their visions of things… If we can understand (that) … the world could be far better than it is now. 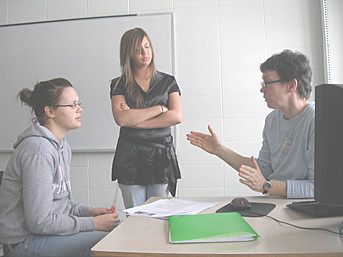 Sharon Coyle with two of the students in her class disscussing their group project which includes students from Sophie’s class at Vanier College.

These students began the process of forming these conclusions with the presentation of the course content and objectives from the course plan of Autumn 2006:

How Do I Know if It’s Real?

Students, in their journey through higher education, seek to acquire knowledge and skills. Institutions such as Vanier College provide the best environment possible for knowledge to be transmitted. But students and teachers alike also acquire knowledge through a variety of life experiences and from a multitude of other sources. This course will focus on exploring what kind of knowledge might be revealed through fiction. Using literature, cinema and theatre as starting points, students will be taken on a multi-faceted journey through the meaning of language and communication, and their relationship with knowledge and reality.

In this course students will be asked to:

One way that Sharon and Sophie presented a variety of life experiences was to have students from the two schools working together so that they could understand the differences in lifestyle between Vanier’s urban location and the rural setting of Cégep Sept Iles.

Students at Sept Îles viewed the film ‘Mambo Italiano’ which was selected by the students at Vanier as a way to better understand their world. Conversely, Sharon’s students asked their team members in Montreal to watch the film ‘La Grande Séduction’ which takes place in Blanc Sablon. The films prompted the following comments in discussion groups:

I moved from California to Montreal a few years back and although it was hard to leave California, I think it would be even harder for me to leave Montreal (…) Although at times, it’s little stressful and cold. I still wouldn’t trade this place for anywhere else.

My friend of mine (sic) left Blanc Sablon 4 years ago and since she’s been here (an actual town) she’s been wanting to go back home. I suppose people like these just as much as any other town or city.

Student quotes taken from hard copy of PowerPoint presentation prepared by Sharon Coyle and Sophie Jacmin called ‘The Vanier/Sept [Iles Project – What did we do?’ presented at AQPC Conference – June 2007

The following course in Winter 2007 was ‘Worldviews of Town and City: Sept-Iles, Montréal and Beyond’. At this point the students were expected to reach beyond their own duality into the multiplicity of life experience worldwide.

Worldviews of Town and City

Today’s world is too interconnected to allow anyone to live in completely isolated, homogeneous cultural communities. While it is generally easy for us to know that people living on the other side of the globe have different worldviews from our own, it is often less obvious to us that differences also exist in the worldviews of people within the same nation, or between regions, or even within the same city. This course will explore worldviews of small town and city by joining two distinct college communities: students from Cégep de Sept-Iles and students from Vanier College. Placed in close contact with each other through the wonders of hi-tech communication, groups of students from both colleges will examine and compare each other’s beliefs and values as members of very distinct communities. Together they will also explore worldviews from around the world, along with the collaboration and conflict that may occur when some of them meet.

This course is designed as part of a team-teaching project with Cégep de Sept-Iles. Every class will include some online team work with our fellow students from the North Shore. Chatting, discussion groups, live video-conferencing, online group work along with more traditional pedagogical approaches such as lectures, watching videos and analyzing selected readings will form a starting point for reflection and discussion. In-class participation, regular work in class and at home, and attendance will be expected of all students.

*The college has a policy that requires you to attend courses. In line with this policy, I will be taking attendance each class.

They did some research on worldviews from around the world, then gave Powerpoint presentations on what they had found. They did not use, say Skype, to talk to people from other regions or schools. That would have been fun though.

The real technical challenge was how to link these two schools together and then how to permit students to go beyond, into cyberspace so to speak, to discover the views of people living around the globe. There was no simple solution. 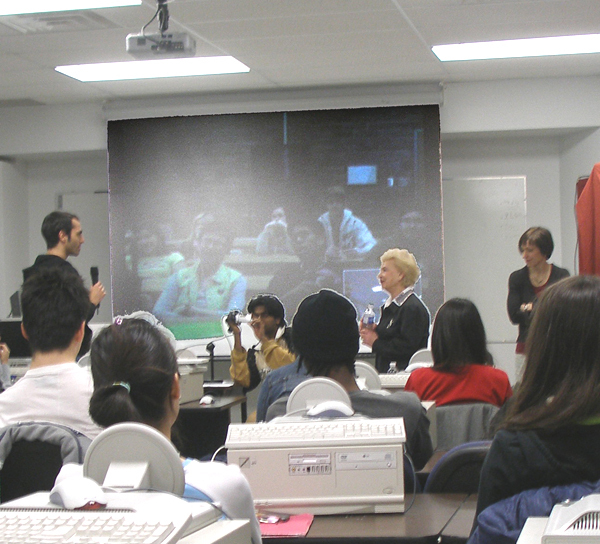 Via their virtual window, Sharon Coyle with students in her class attend a talk by Holocaust Survivor Musia Schwartz as part of Vanier College’s Annual Holocaust Symposium with Sophie’s class. Sophie Jacmin is standing at the right.

This is definitely not the end of this story. Both Sharon and Sophie are looking forward to another year working together. Sharon sums it up in the following paragraph:

We will continue the project next year and improve it with the million things we learned this year. I think one of my biggest revelations is the importance of shifting from read it, write about it, to more interactive, communication and multi-media, research based tasks. I think it might be interesting to add the fact that I feel like I got as much out of it as the students in extra motivation and interest, even IT skill augmentation! There was fabulous synergy going on where we would lead students someplace and they would take us further!

Profweb would like to wish Sharon and Sophie further success as their adventure continues! For any teacher reading this and wanting to explore a similar collaborative venture, Sharon (coys@cegep-sept-iles.qc.ca) and Sophie(jacmins@vaniercollege.qc.ca) invite you to contact them. You can also contact Bruno Geslain or Louise Paul of the Entente Canada-Quebec, which funded this project. They could put you touch with local IT representatives to help make your proposed idea a reality. All of these individuals can be reached by using the reader response feature at the end of this article.

Cite It! A Tutorial to Help Students Cite Sources Correctly