The Future of Adaptation – LON-CAPA at JAC

Michael Dugdale is coordinating a project at John Abbott College using a system called LON-CAPA Online Homework System Plus. The home site of the LON-CAPA project is found at http://www.loncapa.org, and coordination is done out of Michigan State University. Michael learned about the LON-CAPA network as a teaching assistant.

The CAPA part of the acronym goes back to the early 90s when MSU attempted to create a system where students would be presented with individualized problems on-line. It stands for Computer-Assisted Personalized Approach. The professor created a template, and multiple numerical problems were developed from a formula. The variation forced students to learn the procedural work rather than just copying. The LON of LON-CAPA project stands for Learning On-Line Network. With 80 participating universities and colleges, problems created can be made available across the network. 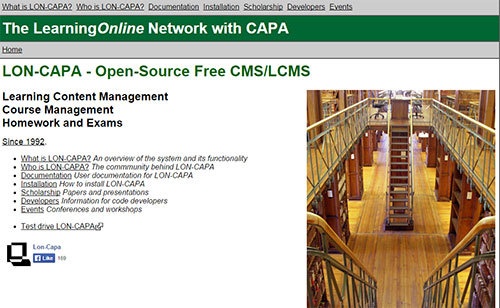 During Michael’s first semester at JAC, a number of teachers were using the on-line systems associated with textbooks. When Michael tried to use one, he found that half of his students had bought second hand books, and nobody had passed on the access codes to the associated website. A lot of negotiation with the publisher and six weeks passed before the first on-line assignment could be done.

This was not the only complication. Many of the available problems were not suitable for use in the CÉGEP-level courses. Writing custom problems would be problematic: it’s a major undertaking, all of which would be lost when the department decided to change textbooks. A home-managed system was needed, and Michael realized that LON-CAPA was a possible solution to this problem.

In-department discussions began, and permission was given to run a pilot through external servers. LON-CAPA at JAC has been growing ever since. Michael got some release time to put together sets of assignments so that teachers could customize without starting from zero. Once assignments are ready to go, the system is easy-to-manage. 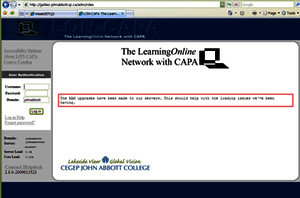 The Login Page of the JAC LON-CAPA Server

Currently, five teachers in the Physics Department are using LON-CAPA, and two or three more are showing interest. There have been inquiries from other departments as well. The system is particularly interesting for other science departments because of its ability to handle quantitative problems. There is even an applet to draw organic molecules.

Michael’s classes are now doing an experiment on the cathode ray tube. The experiment in the lab manual is very difficult to understand whereas a simple animation of what is going on can be extremely helpful for students as a prelab exercise. Michael made that animation in about a day. If he had known what he was doing, the time probably could have been reduced to a couple of hours.

The payoff to all this work is that the student interactions are great! LON-CAPA is being used not just for self graded exercises but for short essays as well. Writing the objectives for the lab report is an example of such content. There are also feedback sessions which encourage student questions stemming from the prelab exercises at the beginning of the real lab session. There are real opportunities for peer instruction at every step. LON-CAPA also supports clicker files whose content can be anonymous or not, in order to more precisely target students who need more explanations. 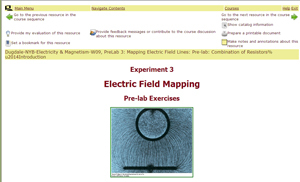 The future of LON-CAPA at JAC is exciting. Michael sees its current use at the college as Phase 1. Phase 2 involves tailoring learning modules to not be just homework assignments but vehicles to provide content. The prelab exercises being developed are the beginning of this trend. Reading assignments have traditionally been out textbooks, but they could be on screen and contain animations and simulations such as the virtual prelab. Students could also propose their own questions. Eventually, LON-CAPA would enable just-in-time teaching methods which could be developed lesson by lesson with media feedback from the students to the teacher.

Phase 3 would add an adaptability component. The static contents for a prelab exercise could change according to the student’s responses. How the student answers a problem would determine what is seen next. A student making an expected error would be given a related hint or a related tutorial tailored to that particular misconception and then be returned to the initial problem. Students wouldn’t have to sit through tutorials that they have already mastered and get content specific to their own learning requirements. Currently, low-level experiments to this end are being done at JAC. 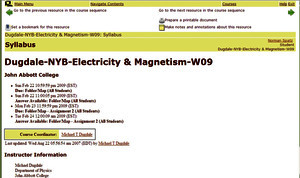 Furthermore, with students who are products of the elementary and high school reforms entering the cégeps, the Physics department is looking to meet the challenge of catering to the needs of digital natives. A diagnostic evaluation, which is an inter-CÉGEP initiative, is considering LON-CAPA as one of the platforms for use in delivering these assessments. Adaptive problems are going to be a part of accommodating this new student population.

Use our Reader Response Feature to share your views about this system with your colleagues!

Oops! I Accidentally Flipped my Classroom

Nathaniel Lasry and Michael Dugdale unintentionally flipped their classrooms by trying to enrich delivery of just-in-time teaching in electricity and magnetism[...]