I have found over my 3 years teaching math at Dawson College, that the traditional lecture style for delivering course material is inadequate. Most students struggle to follow explanations from beginning to end and put off learning for at home. In response to this, I used videos to present the last quarter of my Calculus 2 course for Commerce during the winter 2011 semester.

I bought a Wacom tablet and connected it to my PC. Then I got Camstudio which allowed me to capture what happens on the screen. I make videos of my math lessons by writing out formulas and mathematical expressions, and I talk at the same time while Camstudio records. I then assemble the segments made in Camstudio using Windows Moviemaker which comes free with Windows. By producing the video in one minute chunks, it’s easy to correct and rerecord weak segments. It also defeats the lag problem where the sound gets in front of the image. To record a ten minute video takes about forty-five minutes, maybe an hour.

As an additional benefit, I also use my Wacom tablet extensively in class. I hook it up directly to the CPU in the classroom and the tablet becomes my blackboard. I use my PowerPoint to capture my handwriting and afterwards all of the notes are converted to PDF and uploaded to Léa.

In class, the response was varied. Some students really liked the videos and were quite impressed while others protested saying that they didn’t have enough time to take notes. For these students, I underlined that the videos and .pdf files of the material appearing in the videos were available online.

In my last class of the Winter 2011 semester, I played the video and sat in class. After the video I went through the PowerPoint presentation and answered questions as they appeared. It was a two-step process which was successful and that I plan on continuing to explore.

In the first video, I would write, talk and record at the same time. It was quite slow. If I was writing out a sentence, you would see the sentence slowly appear as if I was writing it out by hand. In the later videos, I would pause the recording, write out the sentence or the formula and then push record so that the text that appeared on the screen in chunks. The video moved along more fluidly so that there was more interest. 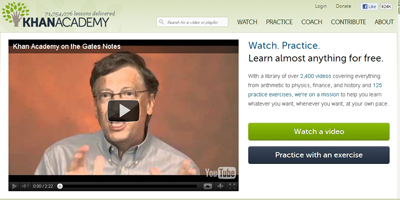 I noticed that the students who are interested in the course, make good use of the videos and often watch them more than once. The others, who typically aren’t motivated for the course, don’t seem much more interested in the videos. In my opinion, this is a complex problem that needs to be addressed by everyone in the learning process; students, teachers and program coordinators, and will not disappear with the use of new technologies.

Since I’ve started making videos, I’ve learned that I am not alone. At Khan Academy (http://www.khanacademy.org/) there are a number of really well-made math videos and the site has become quite popular. The advantage I have over this site, is that my videos are 100% aimed at the needs of my students and what they will be evaluated on. I am looking forward to using videos again in Autumn 2011 where I see a double challenge, improving the quality of the videos and refining how I integrate them into my courses. An option I’m considering is to have students watch the videos outside of class and then focus on problem solving in class.

I would appreciate any comments from colleagues about how they have used videos in their classes.