Getting Second Language Students Talking Together with Social Media

As I previously observed on Profweb, getting second language students to communicate in English can be a challenge, since they are often uncomfortable speaking in front of their peers – especially at the 604-101-level. Recently, my colleagues and I have come up with a great way to break the ice and to get my students to use the English language using social media.

Paige Delaney, my English Language Assistant at Collège Laflèche set up a Facebook page and a Twitter account which is accessible to all students, teachers and language assistants across the province of Quebec (Twitter@EnglishPaige15 ). Once these were up, I began forwarding interesting links to Paige to post on the Facebook page and Twitter feed. 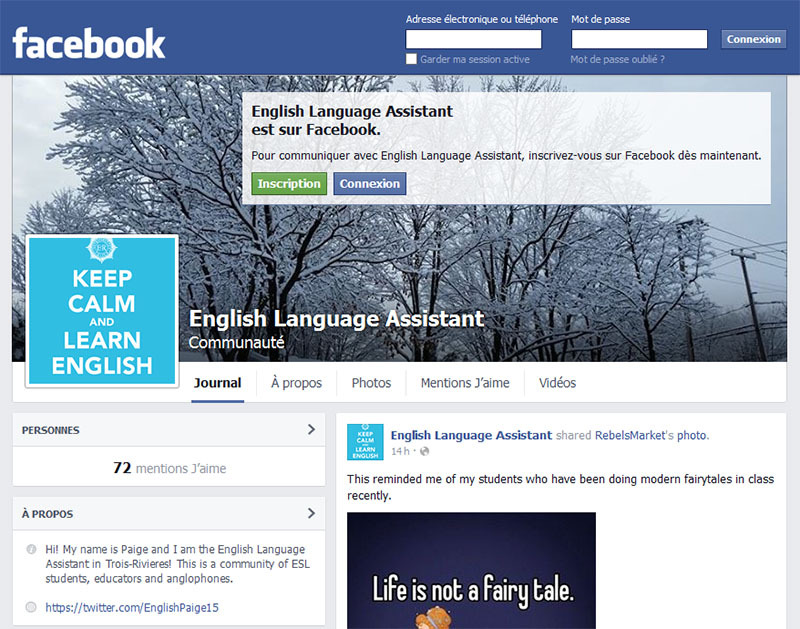 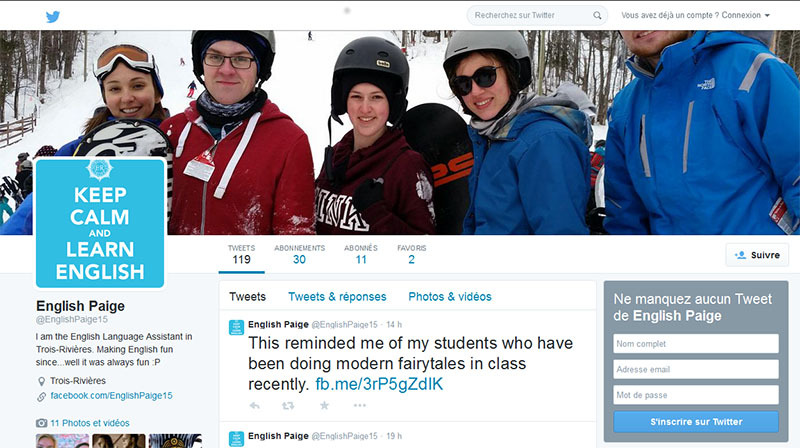 The next step was simply to ask my students to open a Twitter account, and also to ‘like’ the Facebook page that the language assistant had created when signed in with their own Facebook accounts. All but one of my students had a Facebook account when we began the process, and paired up with another student. Less students were signed up with Twitter. The students that did have a Twitter account were enlisted to help out those that didn’t have an account. They circulated around the computer lab until everyone was up and running. It’s worth noting here that Facebook has come a long way to provide more options to protect private information. Even though my language assistant posts on the Facebook page with her personal Facebook account, she has the option to post as ‘English Language Assistant’, rather than posting content under her own name. My initial experiments with social media date back to the 2012-2013 school year. At the time, there seemed to be less options to control the type of information that my students were sharing with me and receiving from me, which raised some privacy concerns.

Getting my students talking

My students were asked to find something interesting on the Facebook page or the Twitter feed that had been posted by the language assistant. When they arrived in class, they spent the first 10 minutes in groups of 4 discussing what they found. This is great since the students divided themselves into groups from the get-go and were already organized for the next activity (I do lots of group activities).

My next step was to get the students to contribute a post to the Facebook page or a tweet to the Twitter feed. They would go into cyberspace and find something interesting to post on subjects about the English language. Our language assistant posts regularly. Her posts often revolve around certain themes, such as holidays, or assignments that the class is working on. They are often witty or humourous conversation-starters. The students are assigned tasks related to what is up on the site. Once they ‘like’ a post, it then becomes their responsibility to share what they learned with the class.

After the group discussions, students are given either a writing or a reading assignment which is then followed by correction (individual work).

Benefits for students and teachers

I am using the approach described above in the General Education Complementary (Formation générale complémentaire) Block 1 604-101 course. However, I am planning to also use it at the 102 and 103 level. I believe all levels can use it as a class starter or a way to conclude course activities (in the lab), coupled with an assignment to enrich what they have learned. I also refer my students regularly to a website that I created on Profweb to continue expanding their knowledge of grammar on their own. Ultimately this approach could be used in many disciplines as a way of getting individuals to work together around just about any theme imaginable.

I also really like the fact that Twitter has a limit on how many characters can be used (140 to be exact). I tell my students that they must focus on summarizing what they have read into a two sentence summary, which is also an excellent note-taking strategy. Students learn to focus on the key ideas, or what is essential in the information they have read. As a result of being on the Twitter site, students started following other Twitter feeds which led to some very interesting discussions. This means that the students were inspired to read and share what they read.

Since students are so familiar with Facebook, it took some of the anxiety away from students who were now communicating with a tool they use every day (and every night). As a teacher, it was definitely beneficial, as the communication was less forced than what would usually occur if I had made each of my students do formal oral presentations, as is the tradition in the discipline.

Sharing with the college network

Once all of the tools were in place for my course at Collège Laflèche, I began sharing the links to the Twitter and Facebook pages with my colleagues that are working on an Entente Canada-Québec project with me. Paige, my language assistant, also created an easy-to-use guide for these Teachers to set up their own Facebook pages and Twitter feeds, complete with screenshots and advice.

My advice to teachers is to brainstorm with your students for great discussions with them. If you are intending to use social media in the classroom, put your students to work from the get-go, assigning them the task of creating guidelines for setting up and using Facebook and Twitter. Whoever is in charge of the Facebook page and Twitter feed must be able to visit the site daily to verify that what is being said respects the guidelines and to update the information on the pages. Students are not afraid to take a few risks. Just roll with it!

Looking forward and looking back

So why did I and Paige go through all this trouble? I wanted to make my courses exciting and leave the students with the impression that they can have fun and learn English at the same time. I also wanted them to see that, despite their age, teachers can still keep up with the interests of their students!

I will probably take things one step further in my future classes, by assigning a minimal number of tweets and posts for the semester to ensure that the sites are continuously rolling with fresh content, while also helping my students to develop the habit of checking on a weekly basis for the latest tidbits about the English language.

Oh, and remember that one student that wasn’t signed up on Facebook? Well, he is now in law school. I guess ‘Facebooking’ in class pays off after all! He asked me to become his friend on Facebook and has continued his efforts to improve his English, even though he no longer has English classes. And I have found a neat way to keep tabs on my students that have moved on after their college student career has come to a close. I can’t wait to see his future endeavours posted on Facebook!

Gina Lavine is an English as a Second Language Teacher and the Coordinator of the Modern Languages Department at Collège Laflèche, which is situated in Trois-Rivières. She is a member of the RASCALS/SPEAQ network of ESL teachers and a frequent contributor of Real Life Stories of education technology integration on Profweb. Gina maintains a useful website for ESL teachers and students that is hosted on Profweb’s Web Space.

Gina Lavine has been teaching for over 30 years, 22 of these at college level. She integrates technology through various projects.

When not all your students are even close to equal – Surviving Multi-level ESL Courses!

Gina Lavine and Lucie Cantin, both teachers of ESL respectively at Collège Lafleche and Collège Ellis, as well as Mariane Gazaille, a professor of second[...]