In the fall of 2019, Mylène Moliner-Roy taught Architectural Modeling and Presentation I for the very first time. In this course, her students learn computer-aided drafting with the Revit Architecture software program. Preparing a new course is always a good opportunity to update knowledge and integrate new technologies. During a presentation by Dominic Carmichael on the pedagogical potential of immersive virtual reality (IVR) with a head-mounted display, she felt compelled to integrate this technology into her teaching.

The possibilities of IVR are myriad; it is a communication and representation tool that will be increasingly present in the architectural community. Immersive Virtual Reality is a technology that consists of creating or recreating an entirely virtual computer-generated environment in which students can immerse themselves by wearing a VR headset. The educational potential of such pedagogical engineering is enormous. Designing simulations or pedagogical experiences becomes accessible to colleges and universities. The democratization of resources and technological advances (hand tracking) in this field are changing the way education is conceived and are opening up new perspectives for curricula. 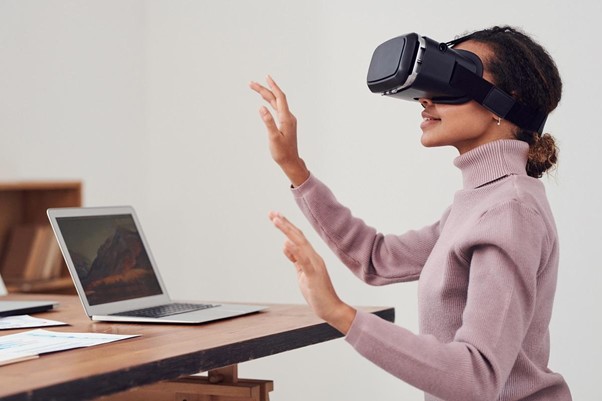 An immersive virtual reality project in the classroom

Headset-based immersive virtual reality was integrated into the 3rd year students’ term project. This was primarily an individual project where each student had to model a tiny house with Revit software. The virtual reality component was a “treat” for the students and its use was not evaluated, but it had 4 specific learning objectives:

Thanks to the help of Dominic Carmichael, the students were able to literally enter their tiny house. They visited the plan they had drawn. This example of experiential pedagogy allowed them to create an authentic activity that was very close to their future professional practices. The students who experience their plan understand the purpose of the skills acquired on their academic path and realize that they will intervene concretely in a living environment.

Walking virtually through the building designed by oneself makes the entire program more tangible. This is very evocative for future architectural technologists. IVR has increased their motivation and the thoroughness of their work. In addition, each student experienced the IVR model of the tiny house of one of their peers. They could thus see a project other than their own, get motivated by observing the details that their colleague had incorporated into their design, and also give them constructive feedback.

Concretely, the students had to realize:

IVR was not the final objective of the tiny house project per se. Rather, it was a design tool that allowed students to better understand the space. By visualizing their house, they had a much better grasp of the ergonomics of the rooms. For the record, Mylène Moliner-Roy had indicated to a student, by consulting his model, that the toilet in his tiny house project was in the middle of a door frame, but he had not made the required modification. When he took the virtual tour of his house, he realized that the location of his toilet was inconvenient and corrected the situation.

To implement virtual reality in the classroom, we used Sketchup software for our data flow and to transpose the 2D plans, drawn with Revit, to 3D.

For the implementation of immersive virtual reality in the classroom, our IT workflow included: 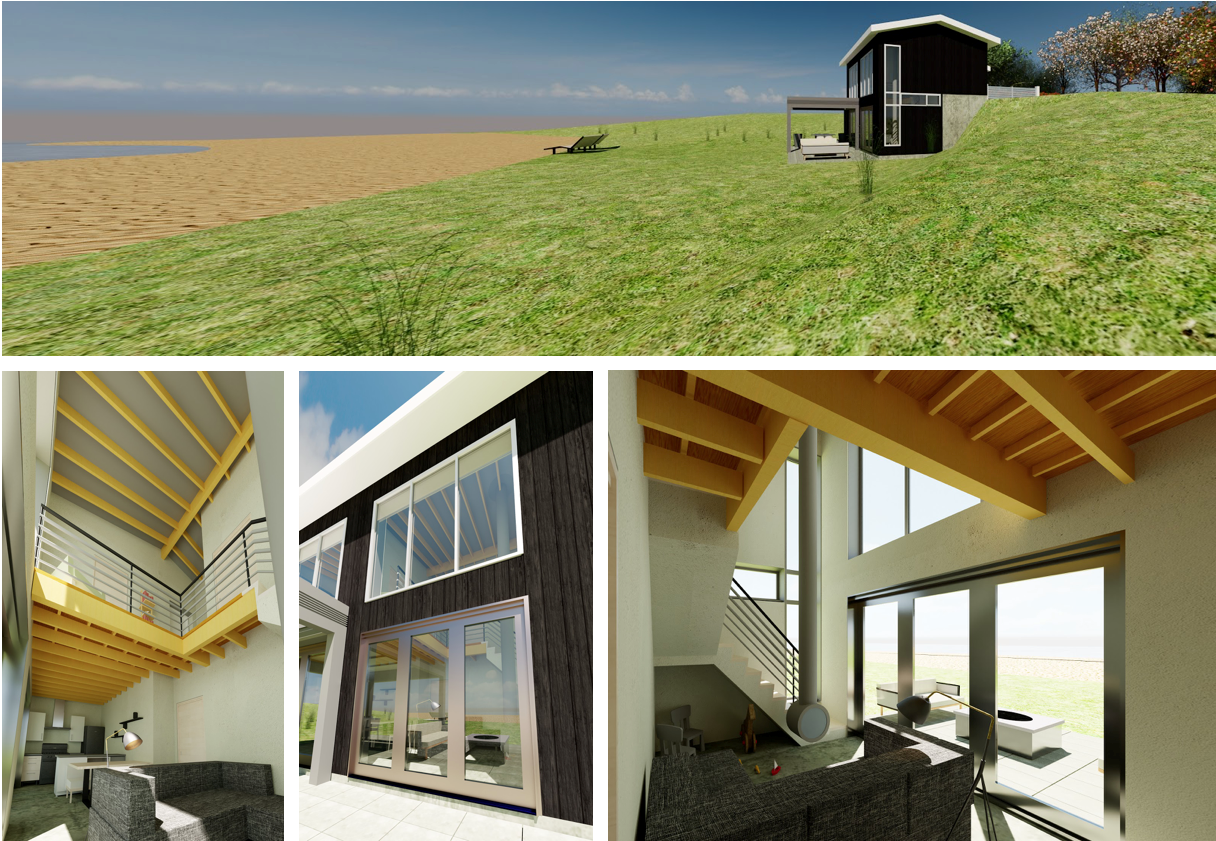 One student even took the experience one step further by bringing in family members who wanted to construct the tiny house she had designed. Bringing the immersive experience to future buyers changes their relationship to space and materializes the final product they are about to acquire in 3D. Otherwise, they have to imagine everything from 2D plans, which is much less concrete. In addition, the virtual tour allowed the future auto-constructors to request some modifications to the initial plans. The student was thus able to better meet the needs of her clients. 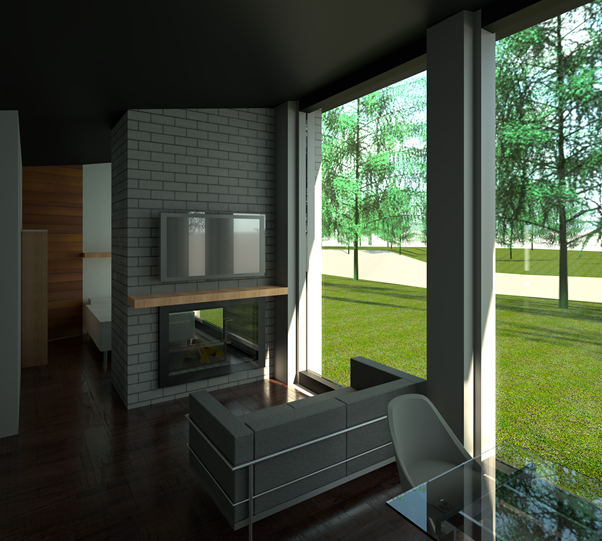 The prospects of the project

The project also took place in the fall of 2020 in compliance with health standards. The teams were reduced, but the students were still able to discover their tiny houses in 3D.

For Dominic Carmichael, this IVR project confirmed the educational value of this technology. He wants to develop collaboration in virtual spaces in IVR and integrate teacher feedback into the immersive worlds created by students. Moreover, for him, video is a declining technology. Video is only a linear account of the realities addressed in a corpus during synchronous and asynchronous teaching. The teacher-student transactional space is limited and only two-dimensional. It is necessary to closely follow the innovations in videogrammetry that will allow for the virtual integration of the teacher in different immersive universes. In short, a field of possibilities is opening up in the field of teaching. Video in volume will make it possible to develop a sense of presence, to break isolation and to push the limits of distance learning. Immersive virtual reality remains a mediatization of knowledge, as is face-to-face teaching. It requires the scripting and staging of content. Augmented reality, mixed realities and technologies projecting holograms are currently accessible and allow creative and audacious pedagogical designs. In education, we need to review our approach, learn to deconstruct our content and use these new technologies that give access to the learner’s physiology (pulse, pupils, body temperature). We can now dream of teachers offering their students, within a cloud computing learning environment (Canvas LMS, Unity Reflect or Microsoft Sharespace), a 3D virtual guided tour of the Acropolis of Athens by transposing themselves on site. Although it is not a gamification of content, this type of engineering is very close to it.

IVR applications open up a world of possibilities in all areas. It’s easy to imagine a collaboration between Architectural Technology students modeling a courtroom to give Legal Technology students a glimpse of it. The same goes for students in Health Sciences or Education who could experience different simulations, giving them a taste of their future work environment.

In addition, IVR opens up new professional universes for Architectural Technology students, as there is more than only residential architecture. Together with the playful nature of IVR, this can make some students want to explore the worlds of video games and film. They are no longer forced to imagine a tangible universe; they can be creative and imagine bold universes that materialize thanks to IVR.

He is an educational researcher focused on immersive digital environment techniques using 3D objects and their interactions in 6 degrees of freedom leading to experiential pedagogies in higher education. He is currently a pedagogical advisor at the college sector of the Séminaire de Sherbrooke. Dominic Carmichael has expertise in multimedia research-creation and is engaged in several research projects using immersive and augmented digital realities.

She contributed her expertise in 3D modeling and design to several cultural projects in Montreal before moving to Estrie, where she founded Vivace Architecte. Driven by the desire to create projects with a positive impact, her practice combines creation, social involvement and teaching. In particular, she teaches building data modeling and actively develops pedagogical applications of virtual reality in architecture.

From Lecturing to an Online Strategy for the Building Envelope Course

The Ultimate Agents of Change

A new drafting software called Revit is changing how architectural technology is taught. Even though industry mandated this development, it will be students[...]