Being Present in the Field thanks to Virtual Reality

When a field trip is important for the students’ learning and its realization is dependent on the weather, virtual reality is an alternative option to consider!

For several years now, in the winter session, Sylvain has been teaching Mesures d’intervention [Response measures] to 2nd-year students in Natural Environment Technology specializing in environment protection at Cégep de Saint-Félicien. This course deals with many different themes and is also an opportunity to organize field activities. However, there is often still snow on the ground at the end of the session and the rivers are often swollen by spring flooding, which prevents outdoor activities from being carried out. Virtual reality has emerged as an interesting avenue to further students’ knowledge and skills without having to deal with Mother Nature.

The origin of the project

The Response Measures course has a large amount of theory that is enhanced by field activities. However, in 5 years, it has only been possible to go on a field trip on 2 occasions due to unfavourable weather conditions.

To solve this problem, various scenarios were considered, including moving the course to the fall semester to have a little more latitude with the weather. However, this solution was rejected because some of the skills learned in the course are prerequisites for the courses taught the following fall.

Estelle Girard, pedagogical counsellor and IT Rep at Cégep de Saint-Félicien, participated in the fall 2019 edition of Numéricamp [in French], organized by APOP. Its theme was virtual reality. She saw the great educational potential of this technology. Sylvain’s logistical headache concerning his field trips appeared to be the right project to test virtual reality!

The different stages of the project

Sylvain was granted release time for the implementation of his virtual reality project. audiovisual technician Laurie Caron, pedagogical counsellor Valérie Deschênes and he worked hard to bring his project to life.

The activity that we tried to carry out year after year was to collect different data and to propose a way to counter the degradation of the banks of a piece of land affected by erosion.

We first identified a problematic area: the banks of the Petite rivière Eusèbe soon require an intervention to stabilize the ground. Then, we went to the site to take a series of photos and videos to create our immersive videos.

Our photo shoot turned out to be more difficult than expected. During the day we had planned, it was pouring rain. Moreover, the chosen bank revealed itself to be steeper and rougher than expected.

Using a 360° camera, we took 2D photos and filmed the bank escarpment to allow the students to accurately assess the volume of soil to be excavated to soften the banks and stabilize them.

For Laurie, this was her first foray into the world of virtual reality. Using Adobe After Effects, a software program for creating special effects, she was able to apply the 2D photos we took of the river banks to the 360° video sequences. Laurie created 12 3D videos into which she judiciously inserted 121 2D photographs. These photos represent the measurements that the students would normally take in the field and record on their data sheets.

Virtual reality in the classroom

In the context of a team project representing 20% of their final grade for the session, students had to define an area of the banks of the Petite rivière Eusèbe to be excavated and accurately estimate the volume to be excavated to soften the banks.

Cégep de Saint-Félicien has 3 Oculus Go virtual reality headsets. This was a happy coincidence, as Sylvain’s two groups were each composed of 9 students divided in teams of 3.

In teams, the students had to:

The students really enjoyed using this new technology. They were impressed with its immersive and fun nature. Coincidentally, in each team, one student was a little more knowledgeable about video games and technology and was able to help their peers familiarize themselves with virtual reality. The activity went very well in class. 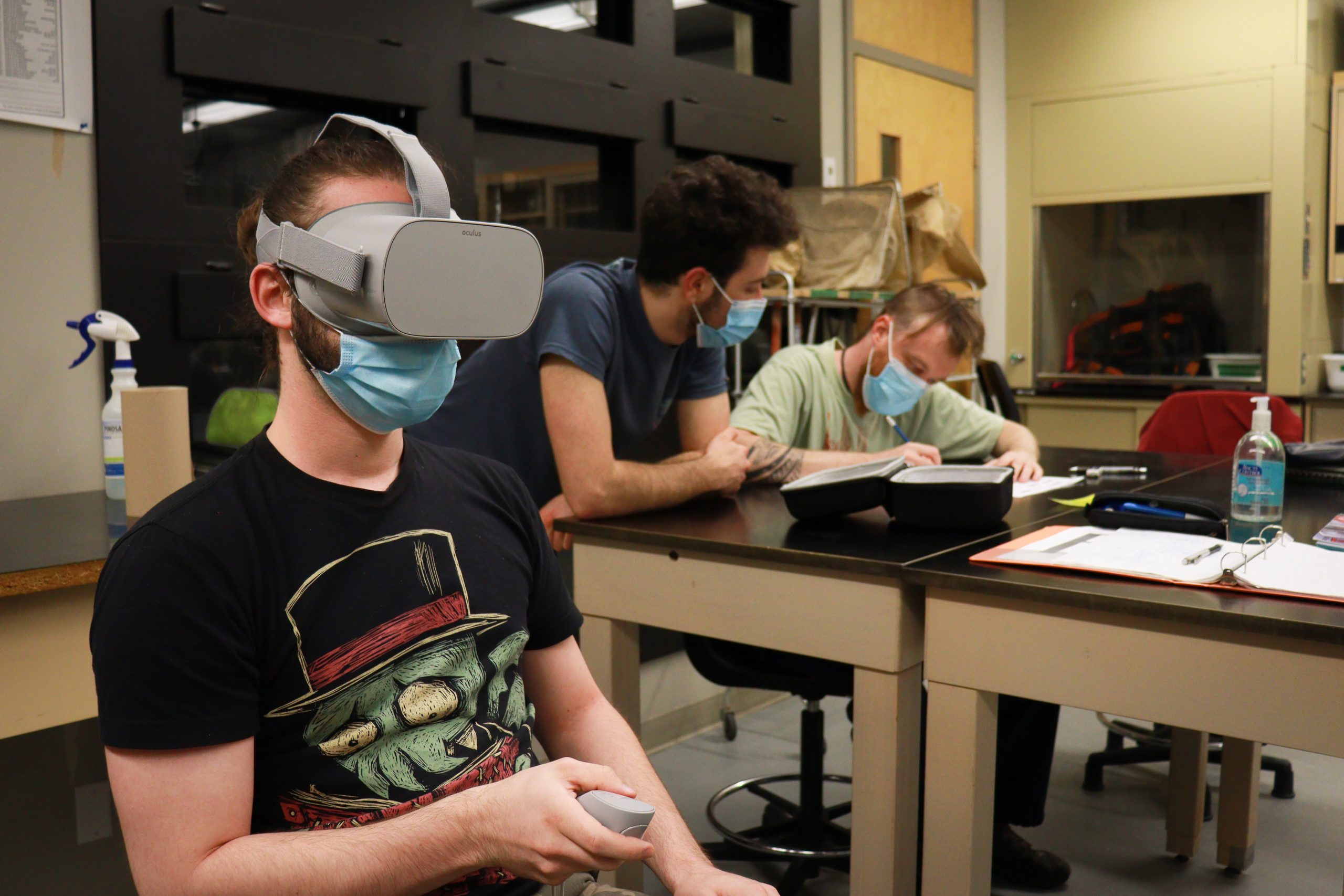 The winter during which we decided to implement this project in class turned out to be very mild. Sylvain suggested to his students that they repeat the same activity during a field trip to the banks of another river as a formative and optional activity. The students really enjoyed doing the activity using virtual reality and also in person. We were able to see during this field activity that the virtual reality activity had allowed the students to fully acquire the expected skills, which is fantastic!

In brief, what we learned from the implementation of virtual reality in the Response Measures course is that the right technology must be used for the right project. Although virtual reality has a very attractive and fun aspect, it is its ability to replicate the reality of the field in the classroom that has allowed the students to acquire the skills they will need to practise their future profession.

He holds a master’s in biology and is passionate about nature. He practiced his profession in the boreal forest before returning to his roots in his native region, Lac Saint-Jean. For 8 years now, he has been teaching students in Natural Environment Technology at Cégep de Saint-Félicien and enjoys passing on his knowledge to future generations.

She holds a degree in Media Arts and Technology specialized in television production. She has worked in Latin America as a freelancer and international cooperant in her field, allowing her to multiply her work and life experiences. She is now an audiovisual technician at Cégep de Saint-Félicien.