Since my graduate studies, I have always been curious to find out if writing about something helped me understand it better. Last year the opportunity to test this theory presented itself when Vanier College created grants for teachers who wanted to do projects fostering student success. The college’s objective is to help students with their study and research skills as well as with their language skills. Inspired by a project that my younger sister had done at McGill with Wikipedia, a group of teachers in Mathematics determined that using a wiki platform could help students to not only express themselves better in English, but more specifically in the vocabulary of the sciences that we are trying to teach them.

We proposed using Mediawiki on a closed platform hosted on the Vanier server for our linear algebra course. One of the reasons why we selected Mediawiki was for its low overhead costs, and its ability to support TeX Notation and Algebra filters so that students could write their equations directly into their text. Student teams would post solutions to problems where they would have to describe what’s going on in their project in a way that someone who was unfamiliar with the problem could interpret.

Upon receiving the grant, we ran the project in three sections; two sections would do the work on a wiki and one would do it on paper as a control. We allowed the students to choose their team members and divide the task as they wished, but also asked them to be accountable for what they had learned. If you did the writing, you had to not only understand what you were writing but what you had been calculating as well. We required a short oral presentation by the team to prove this point.

The teachers who participated in the project with me were Ivan Ivanov and Issac Sabbah. We agreed on the textbook, pace of the course, common assessment (which meant that the assignments and all the tests were the same) and we participated in common grading. We also did a straw poll to see who would do the section on paper, and I lost! Our technician Andy Fuchs was invaluable. He divided up the server in such a way that each student team had their own little slice of the universe to work on, so that no other group could interfere while they were trying to put their project together. After the presentations, we would let their pages go public.

From the students who were doing their projects on paper, we found that with no pressure to have your final project publicly viewed, the explanations were terse and succinct. The answers lacked creativity, and the calculations appeared as a solid block of ongoing equations; forcing the reader to sift through reams of calculations to find results, even though teams had been told that the project should be understood by someone who had no knowledge of the problem’s basic concepts.

On the other hand, the wiki groups’ answers were better articulated, better organized and very creative in their error analysis. The nature of the media must have helped. Although they had a lot of leeway, the structure of a wiki page lent itself well to aiding students to decide how they were going to present their material as opposed to paper.

Not only do the students get a feel for writing what they know, they are using the language of mathematics to express themselves and acquiring research skills. In the Google Page Rank Project for example, we asked students to read an academic journal, and they were able to parse that information and turn it into equations. Students not only work collaboratively, but go out to the libraries and do research; procuring valuable skills to take with them to the universities where the autonomy to sift information on their own will be essential.

The learning curve on the wiki was also really easy. Aside from a question on how to upload an image, there were no requests for information on formatting. In the wiki class, students would be asked if they wanted the lecture to continue or to have some time to work on their wiki. Generally, those groups would opt to work on the wiki whereas when the same option was pitched to the class using paper, they would opt to continue with the lecture. The paper group approached the problem as homework while the wiki fostered a more collaborative effort. 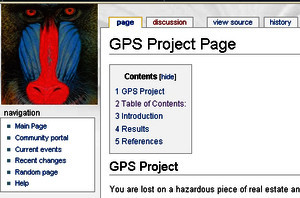 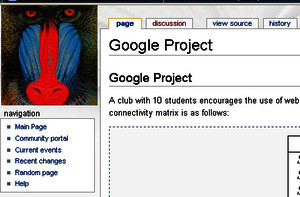 Although everyone worked collaboratively to do the calculations, the paper teams were more isolated. The paper groups worked alone more in the belief that they would get higher grades for handing in the paper earlier than their classmates. The wiki classes put extra touches on their explanations in terms of their calculations as well as in making aesthetic presentations. One wiki group working on a project about global positioning systems considered that the earth was not perfectly spherical; and took into account the differences between the polar and the equatorial radii to generate their geographical location. Another group on the wiki surprised us by examining how the wavelength of the GPS signal affected the precision of their calculations. Because students were already familiar with Wikipedia as a place where you can get knowledge easily, they understood that the reader had to be walked through an explanation. It was really rewarding to see our students become teachers to other students and to the public within the college at large, and to at last see my theory about writing fostering understanding confirmed.

Please share your experiences using wikis with your colleagues from around the province.