The Spirit of Porto Alegre – A Virtual Connection

International exchanges are a wonderful way to broaden horizons. My students are currently communicating with students from UNISINOS, a university near the city of Porto Alegre in Brazil, using Skype. As a result, when the seventeen Brazilians in this program visit Montreal, they will be arriving among twenty-five friends whose common interests and important differences can be better experienced and understood.

We had our first Skype session of the current project in the language lab at Collège Jean-de-Brébeuf in mid-September. Last year’s project’s technical glitches seem to have been resolved. Most of these problems involved just having the network being too bogged down because of the number of users of Skype in my class overloaded the bandwidth available to the college. Skype would fail. Notwithstanding last year’s problems, the two groups were able to meet virtually before the Brazilian students came here on a visit to HEC, but working on a project together was impossible.

International exchanges are a wonderful way to broaden horizons.

Given the problems that occurred with various projects here at the college, the computer department finally came to the conclusion that the configuration of our wired network should be improved. That’s what was done over the summer, and now, everything has been working without a glitch. The support of management and the computer team at Brébeuf has been very appreciated.

I believe that the bonds that one forms in school remain critical and useful throughout the rest of your life.

With the major technical problem hopefully resolved, the students are very interested and motivated. At the last online session, every single student in the class was focused on what was being said. When the questions were being asked, the responses engendered rapt attention. It was a very interesting experience from a motivational perspective. I believe that the bonds that one forms in school remain critical and useful throughout the rest of your life.

One of the things about Skype that attracted me was the ability to expose my students to other cultures in such a direct manner. They make presentations and ask questions on a topic related to Brazil. This simultaneously tells the Brazilians what they know about Brazil while revealing what they don’t know. I find that this breaks down stereotypes in both directions because Brazilians can also have quite a few misconceptions about Quebec. Anyone from around the world would think it’s cold here, so a question about seals during the Brazilian presentations seems perfectly in order. 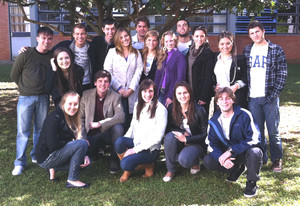 The first goal of the Brazilian teacher and me is for the students to get to know each other, so we want them to have fun. We’re directing our students, but we’re also giving them enough freedom to choose things that they find interesting. The pedagogical goal remains, however, to acquire professional English. The Brazilian students are in a university-level business school program called ‘Management for Innovation and Leadership’ and my students are learning business English. The whole class will be coming here to HEC in about two month’s time, and so our students will meet each other.

We’ve already planned to be doing things together which take into account both schools’ Jesuit traditions emphasizing giving back to the community with grassroots type projects. And, because this is a professional English course, the idea is to work on projects related to socially responsible businesses. To do that, we have to find what kinds of businesses exist in our community that can actually be labelled as socially responsible.

Seeing their faces as we talk confirms that these exchanges are more than mere conversations; they’re virtual visits.

The first phase of this process begins with presentations of socially responsible businesses in Montreal, Quebec or Canada. The Brazilians will present similar businesses that exist in Brazil. Then the next step will be to work on a project that will mix the groups. We haven’t finalized our goals yet because these exchanges are merely small units of the courses due to the differences between the university course and the cegep curriculum. The process is fairly organic, and new objectives are being set each week in online planning sessions with my Brazilian counterpart.

In the second phase of this process, the teams, which will virtually span the continents, will communicate using Skype, and one of the objectives in our session this week will be to have students exchange their own Skype addresses. We assume they’ll be working out of class because their course schedules don’t overlap. I’ve asked my students to take time out of their busy lives on Thursday mornings at 9:30 when the Brazilian class is in session.

I haven’t finalized the details of how students will be graded. What I plan, though, is that those students who can meet for an hour at 9:30 on Thursdays will work in groups of 4 (2 Brazilians and 2 Brébeufers). They will create a blog, which will be evaluated according to the written and recorded (oral) tasks they complete. The types of tasks given to those groups that span the North and South American continents will be the same as those of the other groups taking my Professional English course and this work will replace that evaluation.

One thing I have learned from this experience is patience. Broadband in Brazil can be slow when it’s a holiday and so the connection becomes very poor. I learned as well that technology really does make the world a smaller place. That might sound clichéd, but to actually think that my students were in class in Montreal and were actually talking to people who are seven thousand kilometres away is incredible. And although using a webcam consumes an enormous amount of bandwidth, seeing their faces as we talk confirms that these exchanges are more than mere conversations; they’re virtual visits.

Are you using Skype or another synchronous application in your classes?

The question of getting francophone students over an inability to use English at a register appropriate for the worlds of business, politics, medicine and[...]