This article is a translation of a text first published in Eductive’s French edition.

These days, technologies evolve rapidly, and it is sometimes difficult to resist the urge to adopt them without knowing if their impact will be lasting. Conversely, we may regret having waited too long to take an interest in a revolutionary technology. In this text, I propose some solutions to make technology watch effective.

Every year in September, I go through many reports and articles to select the emerging technologies I will talk about during the year. Many promotional articles highlight the exceptional nature of this or that technology without really explaining why.

For example, they talk about:

So many emerging concepts promise a great upheaval, a rupture, or an irreversible change. How can we ensure that we do not swell the ranks of new technology aficionados, largely influenced by big technology companies that want to create a buzz around their product to create a need? How can we take advantage of technology watch in education without falling into the trap of consumerism?

Here are some tools to better understand the phenomenon of excessive innovation and make the most of it.

The hype cycle and the diffusion of innovation theory are 2 ways to examine how innovations spread.

According to this theory, someone creates or claims to create something new and everyone starts talking about it (a nod to the metaverse of the company Meta, which chose to use a term from a dystopian novel to name a virtual reality platform concept that already existed). The hype builds up and becomes a bubble. The hype bubble bursts… and everyone is cynical about this innovation.

Innovation can be seen to occur in 2 phases:

The discovery phase corresponds to the launch of an innovation. Expectations for the emerging technology are disproportionately high (the peak of expectations corresponds to the buzz effect), while the application of the technology, by the average person, disappoints. Then, the sensational effect of the innovation diminishes drastically to give way to reflection, familiarization and questioning.

The valorization phase, corresponds, in my opinion, to a somewhat calmer period when we can reflect on the uses of this innovation in teaching and learning.

Analyzing the phenomenon of waves of innovation

From a macro point of view, we are dealing with shorter and shorter waves of innovation.

“Technology is evolving fast these days”!

It is the same old phrase that evokes the feeling of a world in perpetual change, punctuated by technological innovations. Thus, the cyclical nature of the economy (which unfortunately sets the pace for our society) does not come from social transformations, demographic changes, or currency fluctuations. It originates in innovation (Schumpeter, 1942)

Joseph Aloïs Schumpeter, a 20th century Austrian economist, explains that ideas are born in clusters following an innovation of technological or scientific disruption. In this digital age, doped with artificial intelligence, the democratization of the web and the accumulation of data, it goes without saying that innovations are coming from all sides. We feel like we have to jump on a bandwagon in motion. This explains the interest of many institutions to develop a watch process to enter the famous digital transition.

This makes it all the more important to take an adoption posture only in phase 2 of the Gartner curve. Basically, when it’s new, we talk about it a lot, but we wait for it to cool down a bit.

That said, this approach has its limits. You have to wait, but not too long, otherwise you will be surpassed by the developing technology.

Getting familiar with the innovation curve

The American sociologist and statistician Everett Rogers, to whom we owe the creation of the theory of the diffusion of innovation in the early 1960s, explains how an idea (or an innovation) spreads. He talks about the hierarchy of consumers in 5 categories:

Innovators choose to continue to believe in a technology even when the hype fades and the general public questions its usefulness.

Early adopters support the use of an emerging technology . The early majority, on the other hand, tend to follow the adoption of a technology only after it has reached a certain portion of the population.

Finally, the late majority and laggards fall into the part of the population that turns to an innovation that has become common and outdated, that everyone uses.

What if the key to not falling into the trap of buzz and obsolescence at the same time, were the track of co-creation or co-construction? 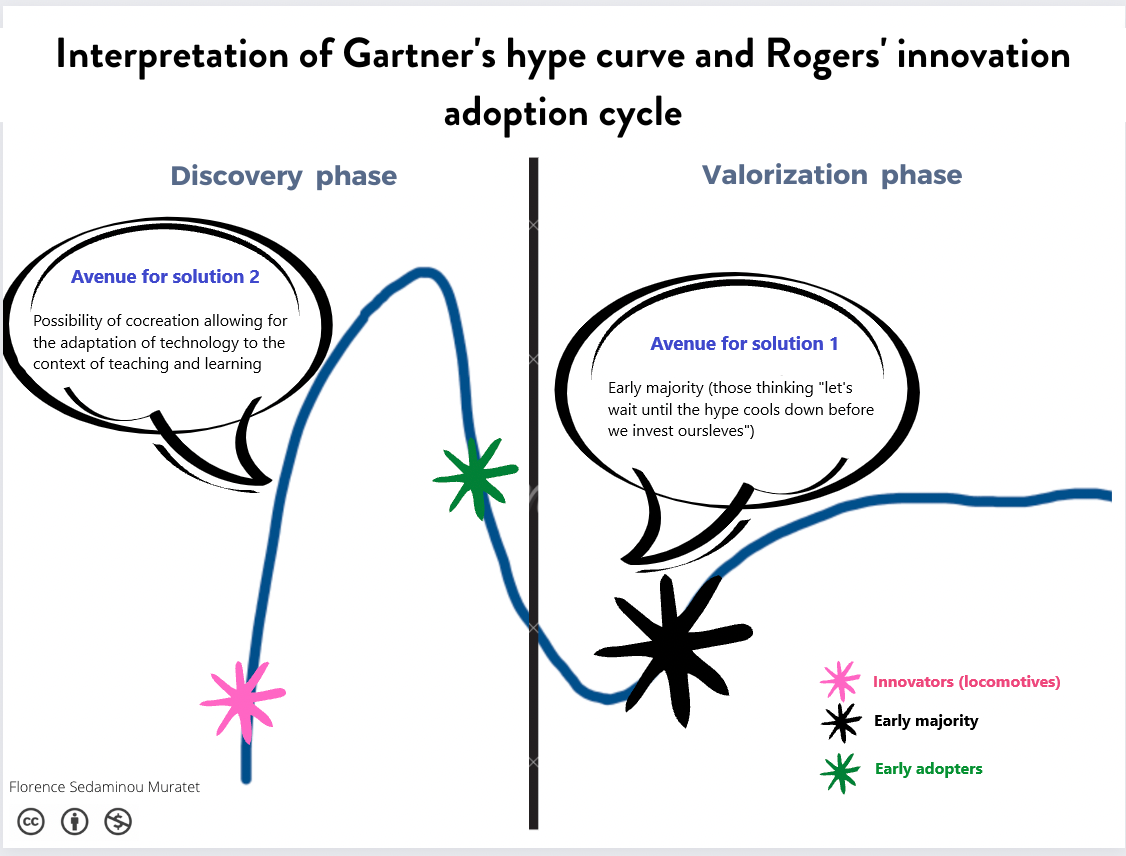 As I said, innovators take risks by staying interested in a technology. They document themselves, develop expertise and can help organizations, institutions, departments, etc., to overcome the disillusionment phase and identify technologies that will hold up. In this regard, to quote Pierre-Julien Guay, former coordinator of the Vitrine technologie-éducation, co-creation is an avenue for innovators, who are locomotives, to enlighten institutions on the paths to take through collaboration.

This concerns, among other things:

The spirit of an organization like Collecto, specifically the Eductive team, is to help target these innovators, create connections between teams, and promote co-creation to test upstream whether a technology is viable in the education environment. My approach is not a solution, but opens the door to thinking about how we monitor, reflect on, and leverage innovation.

To learn more about the issues surrounding innovation

Schumpeter, J. A. (1962). The Theory of Economic Development: An Inquiry into profits, capital, credit, interest, and the business cycle. Oxford University Press.

Various resources on the subject of innovation on Eductive

Florence has 20 years of experience in education. She has worked in France, South Africa and Hong Kong and designed curricula in Humanities and French. With Eductive, her interest focuses on digital transformation’s challenge in higher education. She has taught French, History and Humanities from secondary school to university and more specifically for six years in the IB network, where she obtained a certification in leadership in educational change. Project manager and consultant in digital pedagogy, she is also a Ph.D. candidate at UQAM. Florence’s research focuses on the representation of diversity in the digital age and is involved in various projects in artificial intelligence. She is particularly interested in the anthropology of digital uses in West Africa.

Keeping Tabs on Your Discipline with Tabbed Browsing