Going Back to the Source with Linux

Even if the exact date of its birth isn’t quite clear, one thing is for sure: Linux, the much-lauded free and open source operating system turned 25 in 2016.

La Vitrine technologie-éducation (VTÉ) jumped at the opportunity to go back to the source and provide an update on the installation process and the use of Linux in 2 personal use contexts. 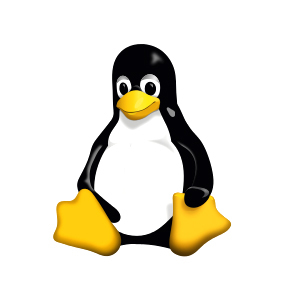 Before you have even tried it, paradoxically you have to choose what flavour of Linux you want. There are a number of distributions (Debian, Ubuntu, Mint, Fedora, Suse, Slackware, Arch Linux, Gentoo, etc.) and it is important to be familiar with the essential features of these. Each distribution (or version) was developed with a particular objective in mind. 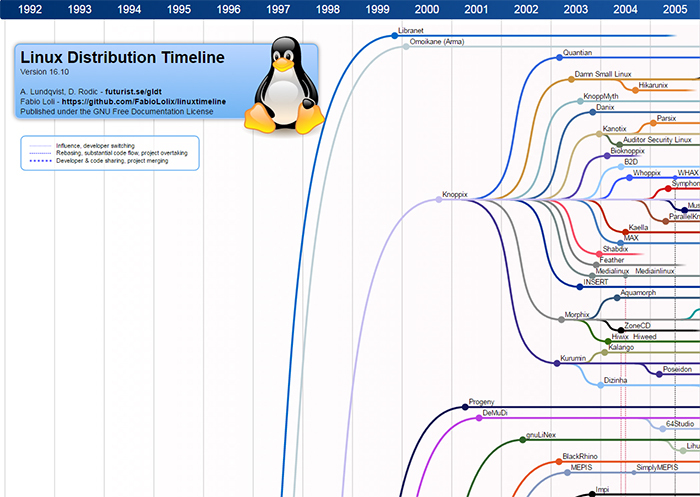 For example, if stability is important to you, take some time to get familiar with the GNU/Linux Debian distribution which is at the heart of the project. However, if you are an early adopter who likes to try things as soon as they come out, you might opt for the Ubuntu distribution instead.

After this first step, you need to choose a desktop environment. This is essentially the graphic interface. Beyond your personal preferences, certain interfaces require more or less memory or a stronger processor in your computer. Again, GNU/Linux Debian and Ubuntu offer a wide selection of desktop environments (GNOME, KDE, LXDE, Xfce, Cinnamon or MATE).

For beginners, you should know that installing Linux can be a bit like rolling the dice, since the risk of running into a technical problem can be high. Fortunately there is a way to discover Linux without any need for installation. You simply download software (like Linux Live USB Creator for Windows or UNetbootin for MacOs, Windows) which allows you to run Linux from a USB key by following the user guide.

Linux Within 2 Personal Use Contexts

1. Discover GNU/Linux Debian in Parallel with Windows 10 on a Laptop Computer

Not so long ago, you had to explore GNU/Linux Debian on a laptop PC without altering the Windows 10 system that was already installed. If you can trust my own personal experience, I wouldn’t recommend that you get involved with this sort of adventure if the terms BIOS, UEFI and Secure Boot leave you scratching your head. Despite the successful installation, the attractiveness of the graphical interface and the ease of use for what followed, I recommend that only experienced users embark on this sort of exploration, especially if they are installing it on their own. Plan to spend a number of hours trying to understand the options that will permit the 2 operating systems to cohabit together.

Be careful: This process involves making changes to the boot options of your computer and can compromise your ability to reboot if you are not careful. For these reasons, I recommend that you not try installing Linux without the support of an IT professional, who is well-versed in open source computing.

2. Use Linux Ubuntu/Mate to Give a Tablet a Second Lease on Life

A second project is to try to give a tablet, such as the HP Stream 7 (which was meant to run Windows 10) a second lease on life. It’s better to tell you upfront that installing Linux on a tablet isn’t child’s play. Again, based on my personal experience, in addition to the problems that I experienced on my laptop, you risk to encounter some compatibility problems with certain modules specific to that tablet, like the touch screen, the management of the touchscreen keyboard, to name just a few of the most important issues. For the same reason, I don’t recommend that you try installing Linux unless you are accompanied by an IT professional that specializes in open source computing. 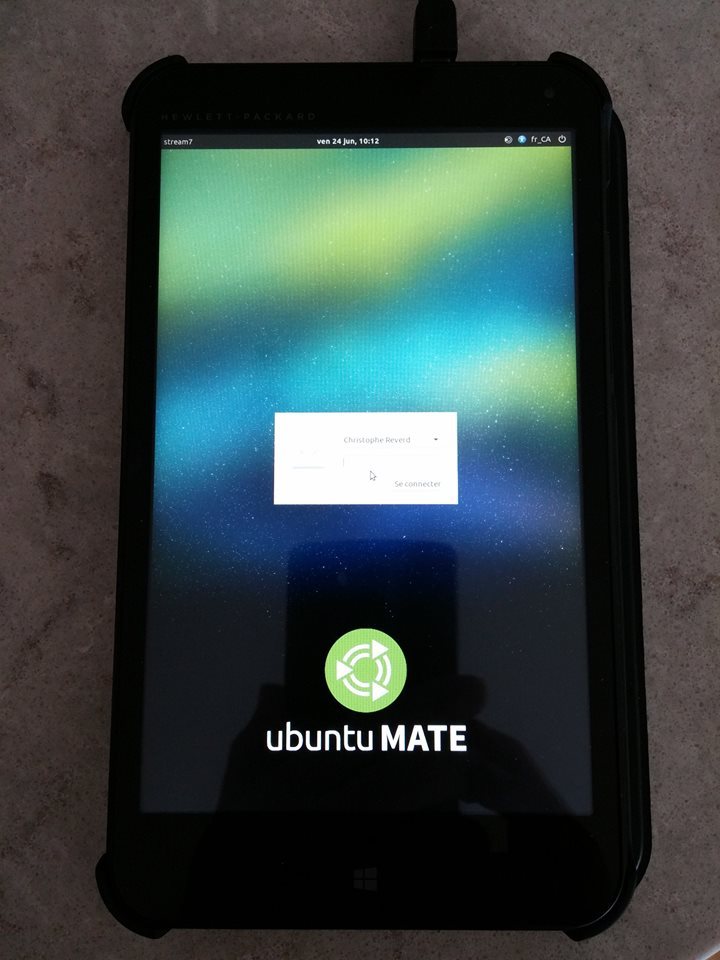 Should we conclude that Linux is not suitable for beginners? Not at all! It just means that maybe you shouldn’t start with a laptop or a tablet.

Discover Linux with Raspbian on a Raspberry Pi Instead!

For the rest, a small, low-cost, pocket-sized computer like the Raspberry Pi will allow you to discover the world of free and open source software and digital ‘making’ through a vast international community, all this… without major hassles! 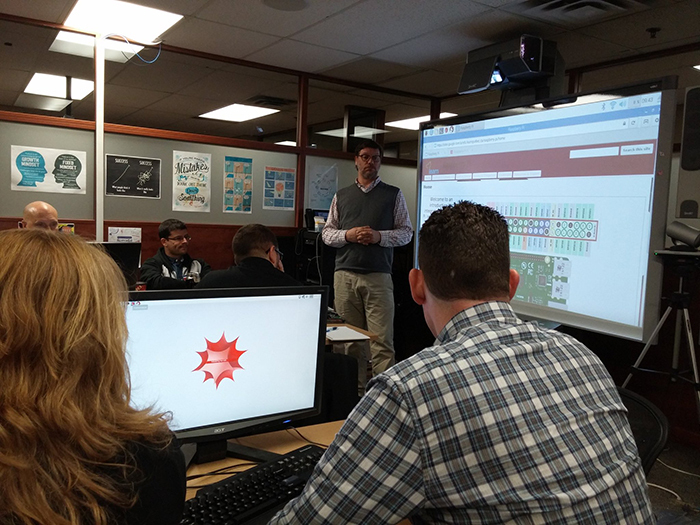 Raspberry Pi in the Classroom Discovery Day that was organized by the VTÉ in conjunction with Club Framboise and Kids Code Jeunesse on October 28th, 2016, and held at the Learn Quebec Headquarters. A number of educators were on hand to explore. (Source: Twitter)

This single-board computer uses Micro SD cards, like the one you use in your digital camera like a hard disk. This allows you to discover Raspbian, a derivative of GNU/Linux Debian with the PIXEL desktop. 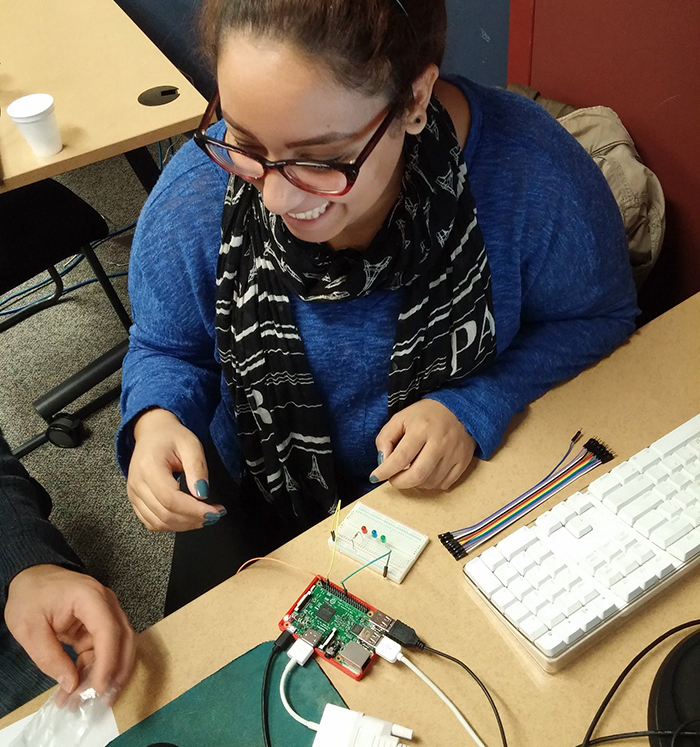 With a smile like this, you certainly can’t jump to the conclusion that learning the Raspberry Pi is difficult. Imagine how engaged the young adults in your classroom will be! (Source: Twitter)

VTÉ Activities On Your Radar?

Following one of my presentations at the IT-REPs meeting in October 2016, which was entitled Raspberry Pi: What is it? Who’s it For?, I received different invitations from colleges that wanted me to present this workshop again for groups of teachers and students.

Certain VTÉ activities are open to the public, such as an activity that was organized in Laval in cooperation with LEARN Quebec, Club Framboise and Kids Code Jeunesse on October 28th 2016. We will surely be running more activities of this sort in the near future. Follow us! 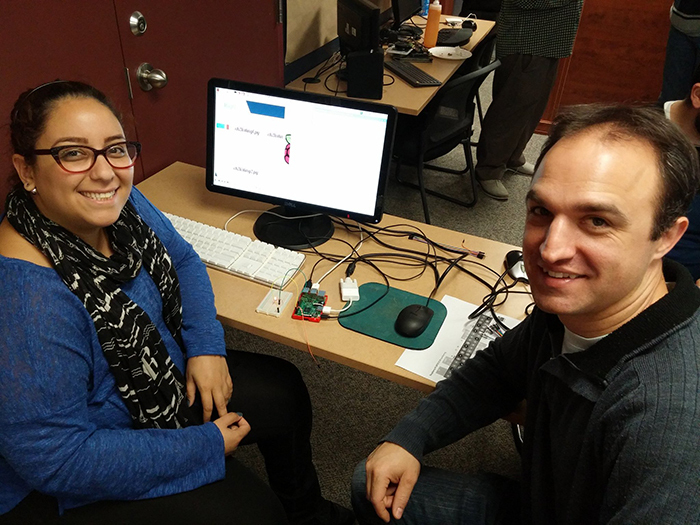 Thanks to Madona and Samuel, the kind and efficient representatives from Collège Ahuntsic, for participating in the Raspberry Pi Discovery Day on October 28th! (Source: Twitter)

All of Club Framboise’s activities (Quebec City, Montreal, Yaoundé) are open to the public. Announcements appear on the ClubFramboise.ca web site and on the Club’s social media accounts. We’re looking forward to seeing you there!

After an initial career as an entrepreneur, then as an IT consultant, he joined the team at Vitrine technologie-éducation as an ICT Education Advisor. Christophe holds a Master’s degree in IT Governance and completed a “microprogramme” in Pedagogy of Higher Education at the Université de Sherbrooke, where he teaches as a lecturer to IT professionals and graduate students in the Administration and Science Faculties. He is also involved as a board member of the not-for-profit Robotique Zone01 and created the Club Framboise, which brings users of the Raspberry Pi computer from Montreal and surrounding regions together.