Video Games as Literature and my 15 Minutes of Online Fame

Earlier this semester, in one of my Culture anglaise et littérature classes, a student requested a quick one-on-one talk in the hallway during a break. As I followed them outside the classroom, I kept wondering how I had put my foot in my mouth this time. To my surprise and relief, the student wanted to inform me that a post they had made on Reddit about my using a video game to teach literature had garnered quite a bit of attention.

Why teach a video game

For context, the first assignment I gave my student this semester was to play through the 1st act (about 1 hour) of Doki Doki Literature Club (DDLC). 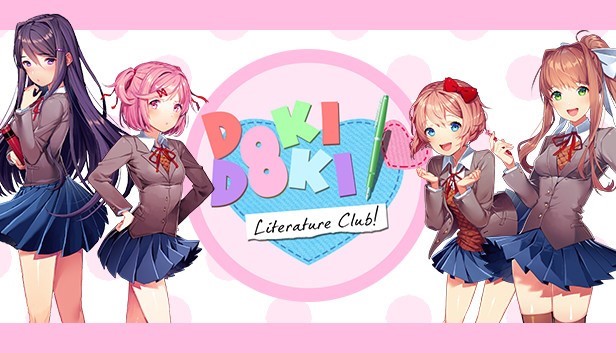 Video game or literature? Why not both!

Beyond the novelty factor, there were many pedagogical reasons behind my decision to teach a video game in my literature class. To begin, one of my main objectives with my course is to encourage students to keep an open mind about what constitutes literature and the literary canon: beginning the semester with a video game set the table for that conversation nicely. I also thought that playing a game would represent a lighter cognitive load on students coming back to school after a long break than, for example, a short story or a novel. Finally, it was obvious that the novelty of playing a video game for school would be a great source of motivation for some.

Two basic technical factors led me to teach DDLC over any other games. As an interactive novel, DDLC does not require any video-game-related skills: if you can click, you can complete the game. Therefore, I did not have to worry about my students not being able to get through the first act because it was too difficult. Additionally, DDLC is freeware and runs smoothly on any computer built in the last 10 years; I did not receive a single message about a student not being able to install or run the game.

As for its literary merits, DDLC is a masterclass in manipulating the player and subverting expectations. The game begins as a straightforward dating simulator. At the beginning, every element of the game is a generic as possible to lull the players into a false sense of comfort. The characters are highly stereotypical, which makes for a great introduction to characterization. Then, the closer the players get to the twist, the heavier the foreshadowing becomes, and there are multiple instances of 4th wall breaks with characters warning the player to save their game.

DDLC’s dramatic shift to psychological horror after the first act of the game has earned it a large cult following. After its release in 2017, the game quickly became a favourite among streamers; its expert manipulation of players’ expectations made for intense reactions and Let’s Plays of the game have garnered millions of views on YouTube. Consequently, the game has a popular and active subreddit to this day.

That is where I made the front page.

A first post had shared a MIO I sent my students to tell them how to download the game and how long to play it. A second post, the one my student confessed to posting, showed 2 pictures of my lecture, taken in the classroom. Together, the 2 posts received over 6,500 upvotes and around 400 comments! 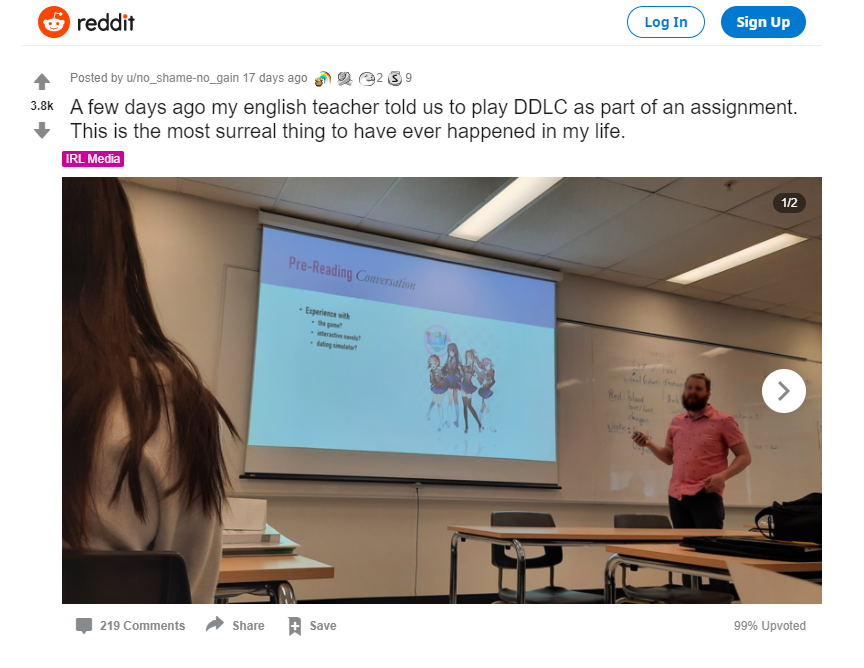 One of the Reddit posts made by one of my students.

I have no problem with some of my projects making their way onto social media: there is hardly better proof that my students are enthusiastic about the material! And, who knows, the buzz around the post may mean a fellow teacher will stumble across it and be inspired to try something similar in their class. But, I am concerned with my online image.

The dangers of going viral

My 1st concern was the possibility of doxing, having my personal information leaked online. However, both students proved respectful of my privacy and crossed out my name or blurred my face in their posts.

My 2nd concern was with the lack of context surrounding the screenshot and pictures. Given social media’s tendency to make mountains out of molehills, I am aware that anything that can be misinterpreted is very likely to be.

DDLC being a psychological horror game, it deals with some serious issues related to mental health. I ensured to prepare my students properly and to warn them to consult the trigger warnings or a review of the game should they feel unsure about the game’s content. Neither post presents this important piece of context, nor that it was a college class and that I only had my students play through the 1st (and tamest) act of the game. Here, context is the difference between “Teacher Exposes High School Students to Traumatic Imagery” and “Teacher Believes Young Adults Can Handle Difficult Topics, with Proper Preparation.”

Certainly, it was flattering to see my idea gather so much attention. But, it also led me to consider adding a section about sharing class material online to my course plan. I believe in the importance of sharing, especially in the field of pedagogy; the idea is only to maintain a modicum of control over how my material is presented and to preserve my privacy online.

Have used a video game in your class? Had a similar experience with class material making its way onto social media? Do you have a section in your course plan about sharing class material online? Share your thoughts in the comment section below.

Simon is a writer and editor at Eductive and teaches ESL at CEGEP Limoilou. Passionate about literature, he holds a bachelor’s degree in English Studies from Laval University. Driven by a desire to improve the learning experience for his students, his techno-pedagogical interests include active learning and gamification.