From March 7 to 11, 2022, members of the Open Education community (OE) participated in close to 200 events. Open Education Global promoted those sessions as part of Open Education Week (#OEWeek). Diverse institutions organized the activities themselves, which were held across the world in several languages.

The event as a whole felt like a decentralized conference.
In these fieldnotes, I’m recounting my experience during this intense week. I’ve participated in a total of 14 sessions, presenting during 5 of them (in bold).

Open Education (OE) is a worldwide movement to overcome all barriers to learning. You might have heard of Open Educational Resources (OERs), which are a significant focus for OE work. Yet OE covers all sorts of practices, including different approaches to Open Pedagogy (which has strong connections in Quebec). In fact, OE occupies an important position in the Landscape of Open, alongside Free Software, Open Government, Open Access, Open Data, and Open Science.

In preparation for one of the sessions, I had created a list of broad trends I’ve been perceiving in the OE movement. At the end of the second day, I posted it on the OEWeek forums. Here’s a summary of my summary of those trends.

What I was flagging as missing was a discussion of quality through pedagogical efficacy. There’s quite a bit of discussion about the perceived quality of content created in the OE frame. Often with an explicit reference to content created by commercial publishers. (And, yes, there are guidelines aplenty which help assess content quality from the production side.) Surprisingly little is said about how effective (and efficient) such content may be at creating an impactful learning experience.

On the 1st day, I’ve participated in a large event for federal public servants in which Open Learning came through several ways. From this experience, I realize that “Learning & Development” in the public service is about making it possible for everyone to contribute to meaningful learning experiences. A neat example from that crowd, which we could leverage in the college network: GCshare – Public Service Open Educational Resource Library (ecampusontario.ca).

As mentioned, I posted my trends summary on the 2nd day. At the same time, I remarked on both hopefulness and vigilance as the conversation moves from affordability of educational materials to shifts in the ways we learn and teach. For instance, Brenda Smith brought up the movement’s impact on re-engaging with pedagogy.

OE’s made of people.

Meaning that people collaborate individually across institutional boundaries. It went well with the “smallness” trend, as meaningful action might not sound like much, in the abstract.
It’s also about “going glocal”, as a global movement embedded locally.
For instance, Francophone university professors in Montreal and Toronto drew inspiration from one another, beyond institutional barriers.
One of our tasks, as members of this global movement, is to inject blood in the interpersonal network which brings us all together.

For me this resonated with conversations we’ve been having at OEGlobal around how “openness” is a way of being. A verb not a noun.

Which itself connected with comments made by Josie Gray (BCcampus manager, Production & Publishing) during our Open Education Symposium panel to the effect that we should be wary of imposing openness on others, especially in the context of ongoing marginalization in academia and Higher Education.

Localization was my focus for the fourth day: adapting material so that it properly fits a different local context from the original.
This theme initially came from an experience at uOttawa in adapting a translation textbook from Canadian English to Canadian French. During an OER showcase organized by fabriqueREL and uOttawa, professor Lynne Bowker pointed to important aspects of the decision-making process in her project. Collaborating with a French-speaking alumna from her translation program, Bowker decided to translate a Canadian English idiom into a French Canadian one.
Which meant that the book’s concluding remarks:

It’s not a comprehensive guide, but it’s enough to get you started, so put your runners on and get going!

Bowker chose the term “runners” as a Canadian equivalent to “sneakers”, “trainers”, or “running shoes” in other English-speaking contexts. Her colleague’s use of a Québécois idiom made that remark contextually relevant. Neutral formulations could convey the meaning of either idiom. The guide itself was explicitly designed as a Canadian alternative to those coming from the UK or the US.

While this may sound trivial, the very process of adaptating a resource between social contexts has a deep impact in the opening work mentioned by Stacey. Perhaps as much so as selecting an open license for the content itself.

The notion is that a learning resource is more effective when it’s appropriate in specific contexts. Generic resources provide little value compared to local ones. Yet it may be difficult to adapt resources between contexts. What Bowker demonstrated was the inner workings of this adaptation process.
There’s a lot of content out there. Especially in English. We need to make it relevant to our contexts.

Localization served as subtext to several other comments made duting OEWeek. For instance, on the same day, Delmar Larsen talked about using analytics to guide improvements in pedagogical efficacy during Larry Green’s Using LibreTexts to Create Interactive OER Content for Your Courses.

While I made several other comments on that Thursday, I’ll skip ahead to my main takeaway from the last day of OEWeek: learning professionals are already leveraging Open Educational Resources (OERs), whether or not they know anything about OERs. This realization came from interactions during Eductive’s first lunch and learn (or is “brownbag lecture”?). Camille Arpin facilitated this session with me. Based on unwitting use of OERs, I misquoted Molière. François Lizotte corrected me. (Both Camille and François have taught French literature.)

In English, the quote would be:

My faith! For more than forty years I have been speaking prose while knowing nothing of it, and I am the most obliged person in the world to you for telling me so.

I’ve also posted my daily highlights on OE Global’s forums. In fact, OE Global issued a Super Sharer badge based on these posts. 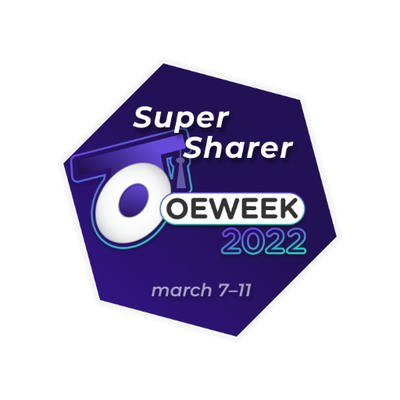 Similar to Mr. Jourdain’s prose, your teaching practice might contribute to OE even if you don’t notice the connection. Which is part of the reason we get so interested in your work.

In both English and French, learning professionals across Quebec’s college network have a key role to play in the OE movement. Let us know about your work and we might feature it here.

He is a Technopedagogical Advisor at Collecto, where he helps learning professionals make technology appropriate for their contexts, just like he did as a technopédagogue for Vitrine technologie-éducation from 2014 to 2016. Alex comes back to this role after a few in Ottawa (creating cybersecurity learning pathways and a Massive Open Online Learning Experience on public engagement), and in Saguenay-Lac-Saint-Jean for participatory-action research at COlab.

What Model for Learning Analytics?

A Model Underlying Learning Analytics? Emerging as a major trend in educational contexts, use of learner data to improve education has been the object of a[...]