Using LEGO to Learn About the Agile Approach in Computer Science

This article is a translation of a text first published in the French edition of Profweb.

In April of 2019, the VTÉ (Vitrine technologie-éducation) organized a laboratory entitled Innovative Pedagogy: Play, Gamification and Serious Games in Service of Seriously Motivating Lessons! (La pédagogie innovante: le jeu, la ludification et les jeux sérieux au service d’apprentissages sérieusement motivants!) During the laboratory, there was definitely an emphasis on technological tools, but I will be focusing here on a “low-tech” way of gamifying in a domain which is, without question, very technological: computer science. See how Stéphane Lévesque, a teacher in software engineering, uses LEGO to initiate his students to the Agile methodology (a project management methodology for teams which is prevalent in business).

Games can be a clever way to help students to develop the methodology for working effectively. As an example, Stéphane Lévesque uses LEGO to initiate his Computer Science students to the Agile method (which is widely used in the realm of business).

There was evidently an emphasis on technological tools during this laboratory. I wrote another article about H5P, which was presented by François Lizotte and Jessika Groleau. Here, however, I will be writing about a “low-tech” gamifying approach within a domain which is very high-tech: Computer Science.

In industry, IT professionals often work within an Agile development context (the Agile method is a means of managing teamwork to respond in an optimal way to client needs.)

Stéphane Lévesque distributes the LEGO to his students and asks them to build a city together (a series of specifications for the buildings to construct are provided: a school, houses, a police station, etc.). Part of the challenge for the students is to learn how to manage the work of a big group. Students have 3 minutes to plan their work, divide up the tasks, etc. They then have 7 minutes to build. At the end of the 7 minutes, they show their city to Stéphane (their client), who provides feedback. For example, he might mention that the scale of the buildings is inconsistent (houses that are larger than the police station), or perhaps the school doesn’t have any windows.

The students learn to coordinate amongst themselves, but they also adapt to the needs of their client, who hasn’t necessarily provided all of the specifications up front. During his first round of feedback, as an example, Stéphane might realize that the police station needs police cars to go with the police station and will then “order them” from the students.

After the client feedback is provided, a second cycle is launched: 3 minutes of planning, 7 minutes of building. 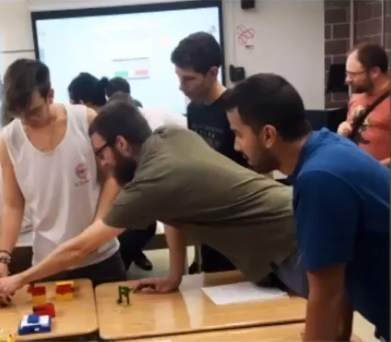 Why should we play?

The dynamics for this game closely resemble what the students will experience later on when they will be involved in a programming project, or what IT professionals will feel when they are working for a client. The game allows for emphasis to be placed on the Agile method itself, upon the interactions between team members and between the client and team members, without having to rely on computer science concepts.

According to Stéphane Lévesque, the activity also works as an ice-breaker, initiating the students to the importance of asking questions and sound communication between team members. Faced with a project, the natural reflex for the students is to focus on the solution without taking the time to consult each other and coordinate their activities or properly identify the client’s needs. The game reinforces their team spirit and sensitizes them to the importance of communication… all while having a little fun!!!

This sort of game can be useful for any course in which students are required to work in project teams, whether you explicitly use the Agile approach or not. It’s a very simple activity which can be prepared in 15 minutes (but you will obviously need to have access to some LEGO).

Stéphane Lévesque didn’t invent the game himself: You can find a number of resources for organizing scrums with LEGO on the web (here’s one of many examples). However, Stéphane did adapt the game for a larger group (his class has about 20 people in the group, which is larger than a typical project team in most businesses): all you have to do is increase the number of bricks and buildings to construct.

Catherine Rhéaume is an editor and writer for Eductive (previously Profweb) since 2013. She also teaches physics at Cégep Limoilou. Her work for Eductive fosters her interest for technopedagogy and encourages her to try innovative teaching practices.

The Swivl: I Haven’t Lost Any Students So Far!

Why develop a mobile application?

The Geek Who Lets Them Seek

Allan McDonald feels we have to show students how to find information because in the computer science industry, one can’t know everything. As long as he can[...]