This article is a translation of a text first published in Eductive’s French edition.

“Have your own ideas! What we want is your vision of things; not someone else’s.” This is the message at the heart of an awareness campaign aimed at college students and developed by a joint task force of the Network of ICT respondents (ITREP Network – Réseau REPTIC) and the Regroupement des bibliothèques collégiales du Québec (REBICQ) [in French].

Academic integrity is an ethical posture, but it is also something that must be learned. Learning how to select reliable sources, learning how to distinguish a quote from a paraphrase, and learning that in both cases, one must cite the sources… To learn all this, students are not alone: there are resources for them in their college!

From 2015 to 2021, a joint task force of the ITREP and REBICQ networks worked to value academic integrity. (The ITREP Network and the REBICQ Network are 2 communities of practice managed by the Fédération des cégeps that bring together people from all CEGEPs and private colleges).

A 1st project: a guide on plagiarism and academic integrity

The 1st project of this task force (of which I was a member for a while!) was to produce the Guide to Academic Integrity and Avoiding Plagiarism. This guide is intended for teachers, to provide them with training, but also to suggest resources to use with their students.

The next step: educating students

The project was to provide colleges with promotional tools that could raise awareness of academic integrity among students.

Thus, to have academic integrity, it is not enough to understand that cheating is wrong. One must also have the necessary skills and know-how to not cheat. Among other things, you have to know how to select your sources, know how to cite them and also have the desire to do so. The team therefore wanted the campaign to be an invitation for students to form and inform themselves.

The campaign signals to the student that “What we want is your vision.” When we ask someone who is a college student for their own vision, we agree that this does not mean that this person will revolutionize knowledge about their discipline. However, they will be asked to be knowledgeable about their subject, to be able to defend a documented point of view.

The Commission des affaires pédagogiques (CAP) of the Fédération des cégeps saw the value of our project to coordinate our efforts so that the same message would circulate throughout the college network. They gave us the go-ahead to set up an awareness campaign. However, the team was made up of pedagogical counsellors and librarians, not communications specialists. So, before going any further, we explored the different possibilities that existed. We learned about the remarkable campaign designed by the Cégep de Baie-Comeau for its students [in French], and we were won over by it.

We contacted the Cégep de Baie-Comeau and they generously agreed to share their material with us. We worked with the graphic designer who had designed the original images in Baie-Comeau to produce editable versions that allow each interested institution to customize them by adding their logo or a link to the library page (or another institutional web page designed to support students in their learning of academic integrity). 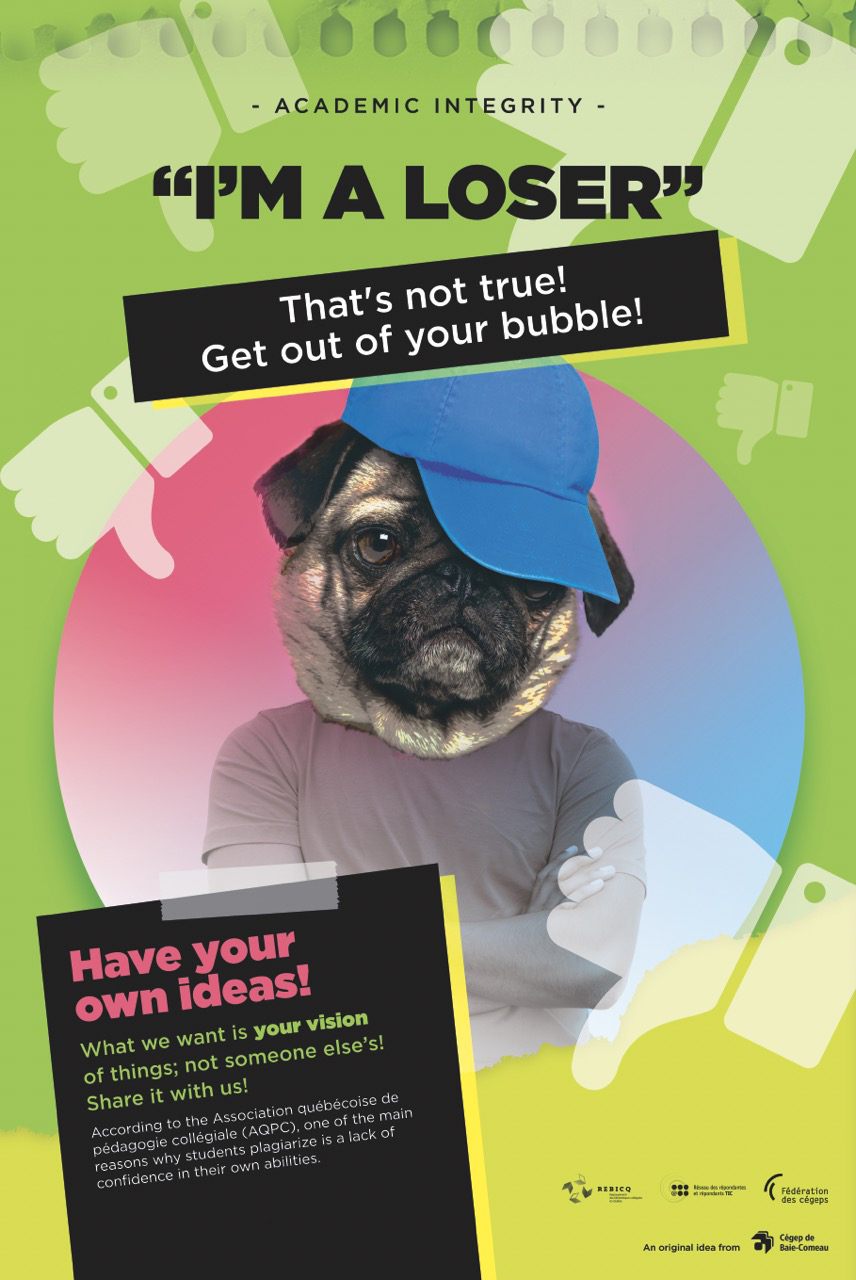 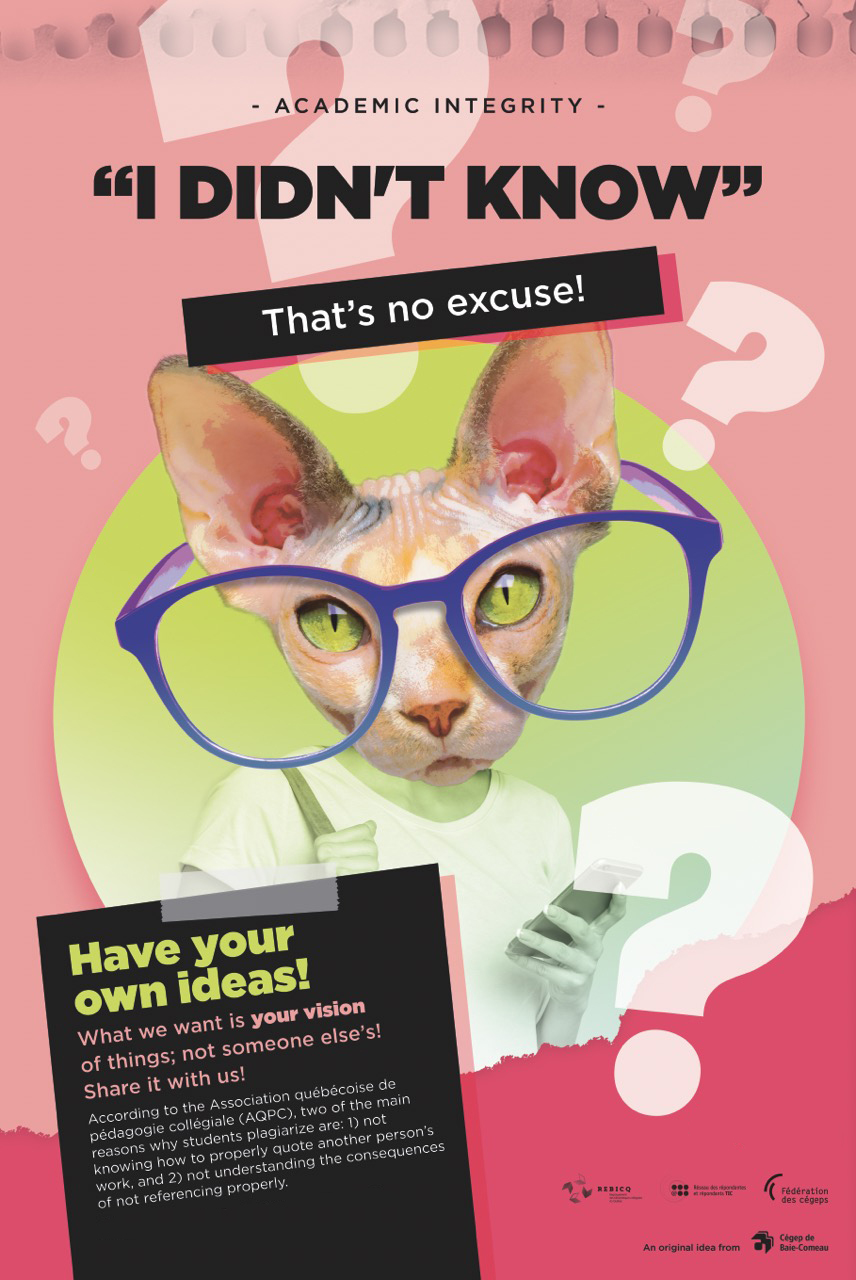 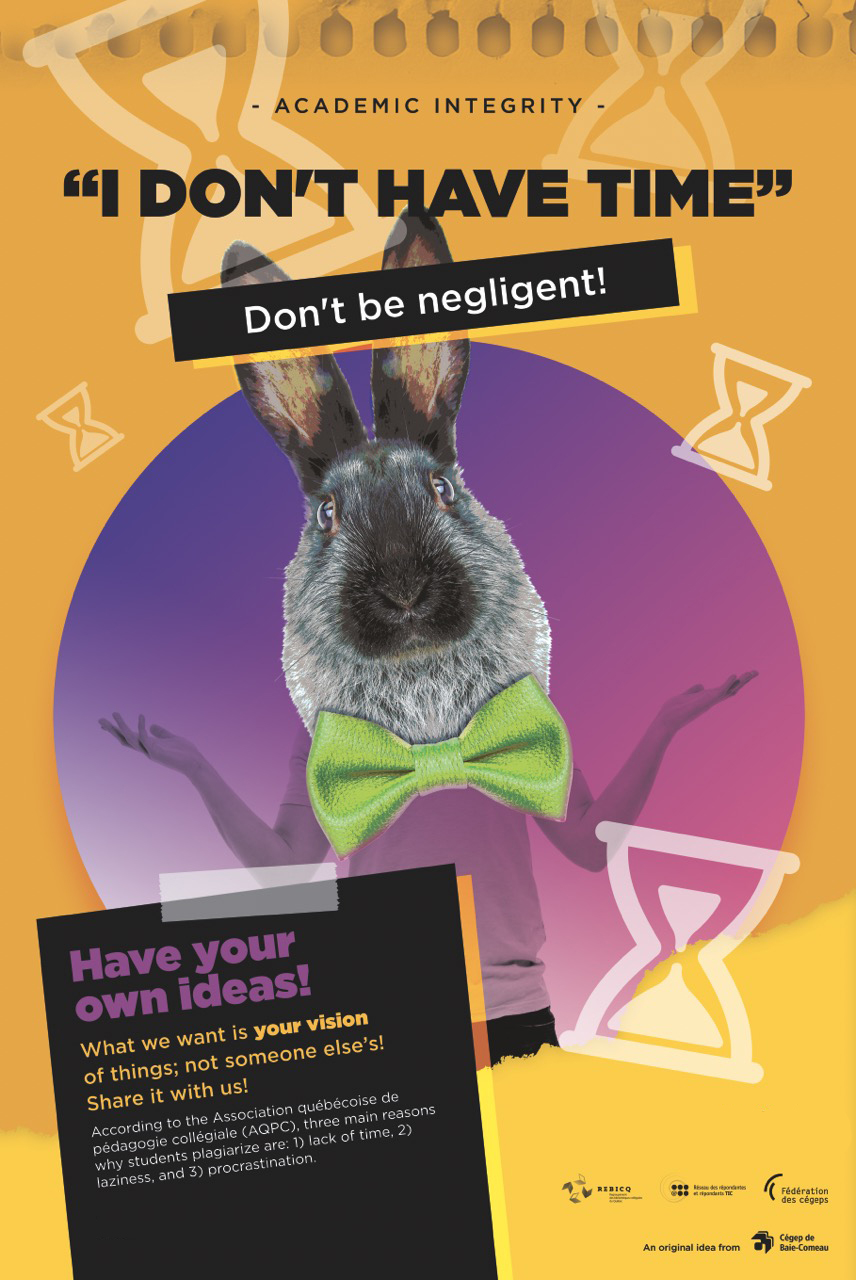 The 3 posters created for the awareness campaign.

This version of the banner is designed to be used in such a way that clicking on the image will take you to an information page relevant to students (for example, the page on the college’s library website that is dedicated to plagiarism prevention).

This version of the banner is designed to be used statically (it does not mention “Find out more,” which encourages clicking).

One of the 3 web banners created (in 2 versions) for the awareness campaign.

One of the 3 visuals to add to an email signature that were created as part of the awareness campaign.

This visual is designed to be used in such a way that clicking on the image will take you to an information page relevant to students (for example, the page on the college’s library website that is dedicated to plagiarism prevention).

Another version of the visual (without the “Find out more” mention) is designed to be used without hyperlinks.

All members of the ITREP, REBICQ, Repcar [in French] and Repfran [in French] communities of practice have access to the campaign files in editable versions, as they are deposited in the SharePoint storage spaces of their respective communities.

So, to implement the awareness campaign at your college, if it is not already deployed there, contact your IT rep, your librarian or the person in charge of the help center! (In CEGEPs (public colleges), the people in charge of communications also have access to the files through the shared space of the communications committee of the Fédération des cégeps).

Also note that all materials are available in French for Francophone colleges.

Students are not alone in learning about academic integrity

The message from the Cégep de Baie-Comeau was the same as the one we wanted to convey: academic integrity is a matter of ethics, but it is also something that can be learned. And, to learn it, students need to know that, in all colleges, there are resources to support them (in the library, at the very least).

What can you do as a teacher?

As a teacher, you too can be affected by the campaign. The entire teaching community needs to understand that it is not enough to tell students that they should not plagiarize: they need to be taught how not to plagiarize, how to have academic integrity.

If you want to support your students in learning about academic integrity, you can contact your college librarian to find out what services are available. Many libraries offer training on academic integrity to students. Many can also work with interested faculty to develop course or program-specific, in-class training.

You can also approach your pedagogical counsellors for support in creating assessments that minimize the risk of plagiarism by the very way they are designed.

We are very aware that our materials alone will not solve the problem of plagiarism in colleges. It is one action among many. Academic integrity is an important issue that deserves ongoing resources.

Our awareness campaign is there to plant a seed in people’s minds. We hope that it will open the door for colleges to think more broadly and implement rallying practices! In the meantime, if academic integrity is an issue that concerns you, talk to your librarian or IT rep!

Lucie Delhomme is an educational affairs advisor at the Fédération des cégeps and has been in charge of the Regroupement des bibliothèques collégiales du Québec (REBICQ) [in French] since September 2020. With experience in French higher education libraries, she joined the Quebec college network in 2018. She was first a coordinator of a documentation center and an active member of the REBICQ community of practice before devoting herself to its coordination.